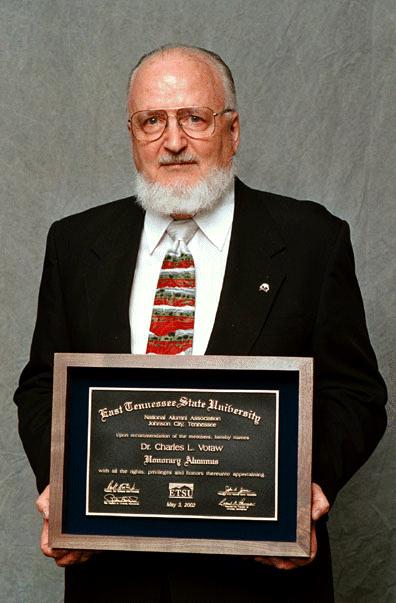 He made his way to the mountains of East Tennessee by way of Michigan. He reportedly had long hair, seldom wore a tie and sported of all things, bright red socks! Dr. Charles Votaw received his undergraduate degree from Hope College in Holland, Michigan, and his M.D. degree from the University of Michigan Medical School. He went on to earn his Ph.D. from the University of Michigan's Horace H. Rackham School of Graduate Studies in the field of neuroanatomy and neurophysiology. During his first interview with ETSU, Dr. Votaw made it clear that he did not want to be involved with curriculum, because this had been his main responsibility at the University of Michigan. He arrived on campus with his wife Dr. May Votaw and their three children. Dr. Votaw's first title was associate dean for clinical affairs, but as luck sometimes turns, he soon became engrossed in curricular issues as the first class of medical students were admitted to what is now known as the James H. Quillen College of Medicine.

Dr. Votaw's accomplishments and commitment to East Tennessee State University are numerous. He is known for guiding the development, from the ground up, of the medical school's curriculum. He chaired the deliberations of the curriculum committee, ensuring that the integrity of academic programs were maintained at all cost.

Dr. Votaw designed and implemented the Pre-Medical Medical Program, in which undergraduate students were admitted to medical school after the completion of their first year in college and were allowed to integrate med school courses with the undergraduate curriculum. Students were required to major or minor in the humanities for the purpose of learning to deal effectively and compassionately with patients. The program was also intended to reduce the premedical syndrome, demonstrating Dr. Votaw's belief that medical school should be a pleasant experience.

Whenever there was a need within the College of Medicine, Dr. Votaw was always willing to help. He taught in a neurobiology course for medical and graduate students, for which he received an outstanding teaching award. He was course director of a "Practicing Medicine" course for sophomore students. Dr. Votaw has served as interim chair of both the departments of Family Medicine and Internal Medicine. He was also known as the "Accreditation Czar," for leading the institution through eight accreditation visits, including two major self-studies. To honor this beloved academician, in 1995, the Charles L. Votaw Auditorium in ETSU's Palma L. Robinson Clinical Education Center was officially named. Dr. Votaw received an Honorary Alumni Award from Hope College, his undergraduate alma mater, in 1997. Most recently during the dedication of Stanton-Gerber Hall, Dr. Votaw and his wife were applauded for their work in making the building become a reality. In addition to his duties with the medical school, Dr. Votaw has published 10 research papers, five abstracts, and given seven presentations to societies in the area of neuroanatomical and educational research.

After giving 18 years to the Quillen College of Medicine, Dr. Votaw decided to retire. He worked on a half-time basis doing facility planning as the College of Medicine moved toward space consolidation with the James H. Quillen Veterans Affairs Medical Center at Mountain Home. He also enjoys spending time with his children and grandchildren, international travel, books, photography, opera, and serving on the Johnson City Symphony and ETSU Retirees Association boards.