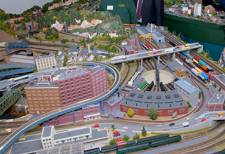 Devoted to the region’s historical ties to railroads, the museum is dedicated to the memory of George L. Carter who built the Clinchfield Railroad through 277 miles of mountainous terrain to carry coal from

Eastern Kentucky to the Carolina Piedmont. In 1909, when the state’s selection committee visited the area while searching for a site for a proposed teachers college, Carter offered his 120-acre farm and $100,000 toward the establishment of the normal school, which became ETSU.  There is no admission charge but donations are welcome.