This is an interesting article from Journey North, on what is going on inside the eggs before they hatch. Eagle eggs hatch one to several days apart depending on when they were laid. Eggs hatch consistently after 35 days of incubation. About 4 days before hatching the chick develops an egg tooth at the top of its bill. From inside the egg the chick pokes a hole in the membrane separating it from the air bubble at the top of the egg shell. Still inside the egg, the chick takes its first breath into the air bubble. and draws in its first breath. This bit of air will provide energy to scratch a hole through the egg shell to the outside. The hole poked through the membrane is called the internal pip. The hole pecked through the egg shell is called the external pip.After breaking the membrane with its egg tooth the chick can breathe the air that filters through the porous egg shell and vigorously starts the final process of hatching. The chicks hatch from the eggs without any help from the parents.The chick uses its egg tooth to scratch around the inside of the shell in a circular path. The scratches weaken the shell in a pattern all around the egg. This is called pipping, and it can take from one to two days. When pipping is completed the chick gives a few expansive bursts and the shell opens up During hatching, a chick must undergo several physiological adaptations. Before it hatches, a chick absorbs oxygen through the shell by way of the mat of membranes under the shell. During the hatching process, the chick must cut the blood supply to these membranes and trap the blood within its body. The chick must also absorb the yolk sack into its body and inflate its lungs for survival outside the egg.If eggs don’t hatch, adults will initially continue incubating, then start spending longer periods off the eggs and eventually give up. Copyright 1997-2017 Journey North Are there certain times of the day that one or the other parent are off the nest and flying, hunting, perching, in the area? Both parents take turns on the nest incubating the eggs and very soon taking care of the eaglets. So when one is on the nest the other one is off flying, hunting, perching, etc. in the area. Early in the morning right at daylight they have an exchange usually, after that you just never know during the day, also in the evening right before it gets dark you should be able to see a fly-in of ever who was out last. Right now there's just a lot of incubating, things will pick up once the eggs hatch. Why does it look like there's a bright light on the nest at night even showing "shadows" of branches, etc? It looks bright but it is not and it does not disturb the birds. The thing is, infrared light is completely invisible to the naked eye. So it doesn’t look like a bright light is flooding the area from the outside, but it actually is—your eyes just can’t see it. Furthermore, night vision footage from cameras always looks black and white because human eyes can differentiate between black and white better than they can with other shades of colors, like red or blue. Because of that, most night vision cameras switch to a monochrome filter to make it easier for us to see the image.

Haliaeetus leucocephalus The Bald Eagle is the United States' national bird and is an easily recognizable species even to the casual observer. No other bird has a bright white head and tail with a massive yellow bill. Bald Eagles belong to the family Accipitridae, which also includes hawks, kites, harriers, and Old World vultures. The scientific name roughly translates to "White-headed Sea Eagle," which is appropriate because these birds are almost always nesting around water. 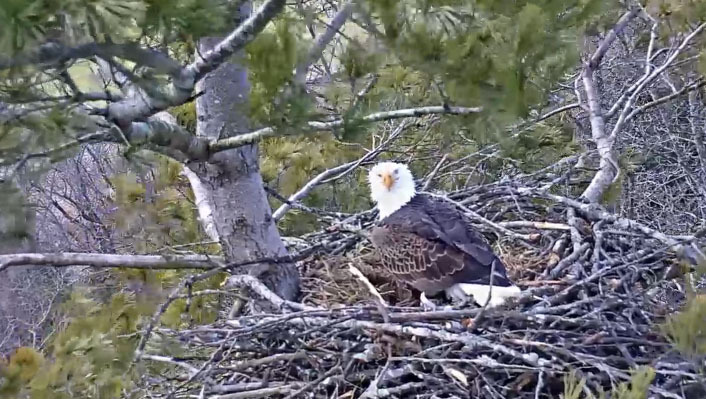 At the time the cameras were erected, Our Johnson City nest had been used for 3 years and our Bluff City nest had been used for 4 years, and you can see how enormous they already are! Eggs are hatched in about a month's time, and nestlings remain in the nest for 2-3 months. Young Bald Eagles appear all dark with their dark bill and a mottled mix of brown and white plumage. It typically requires 4-5 years before the young develop the characteristic yellow bill with white head and tail of an adult.

After Shima's departure from the nest in January of 2022, many viewers were left wondering why a new female replaced would take over the nest in place of Shima. Intraspecific intrusions are not uncommon amongst bald eagles and elfruler.comcontains reliable and accurate information about the phenomenon.