BLUFF CITY, TN - nest home of Eugene and Frances: The cam went live in 2016 it was reported from the landowner & ground-crew that the pair had already fledged 8 eaglets successfully the previous 4 seasons.

February 3rd- egg #1 laid February 6th- egg#2 was laid. Only one of the eggs was viable at the nest and it hatched on March the 9th. BC-9. (Limited information on event times as it was the first season for our program).

The season proved a good one at both the Bluff City, TN (BC) and Johnson City, TN (JC) nests, with humor and very little drama. Infrared imaging sensors were installed at both locations on each camera. This new technology gives viewers a much clearer 'picture' at night-time.

Both frequently returned before their final departure. BC11 likely was a female based solely on size. There is a website video of her landing on the underside of the nest and BC10 looking down at her. Frances and Eugene were romantically active, per usual, and a video captures Eugene falling off both Frances and the nest during one intense amorous event.

These eaglets were referred to as the “twins”. The JC cams crashed on the Friday of Memorial Day weekend, and during this time the eaglets fledged, although we do not have the specifics, we do know that fledging occurred between May 26-29. The eaglets returned in a timely manner before final departure. Also, this is the year Shima returned from a nest outing with what appeared to be a clay red face, both “cheeks” stained red, which remained for the entire season (see pictures). She looked harlequin and certainly was easy to identify! 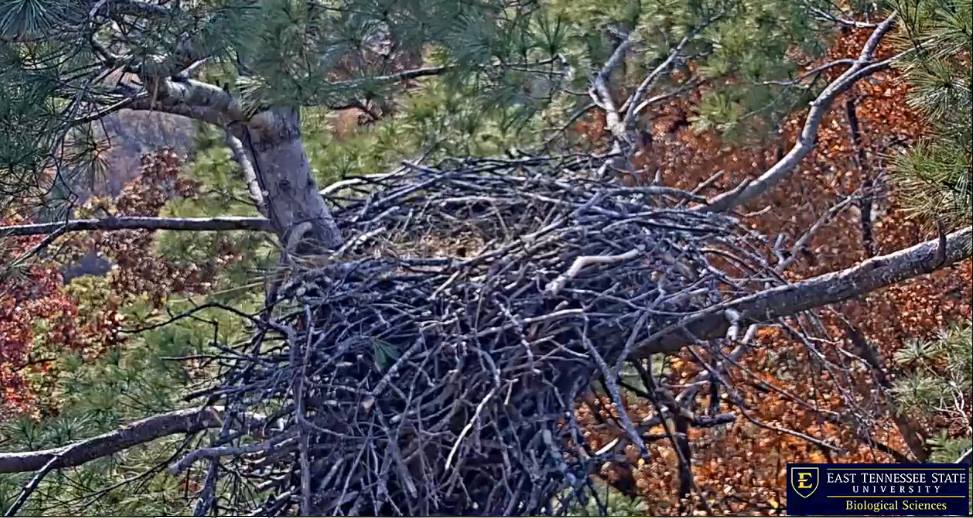 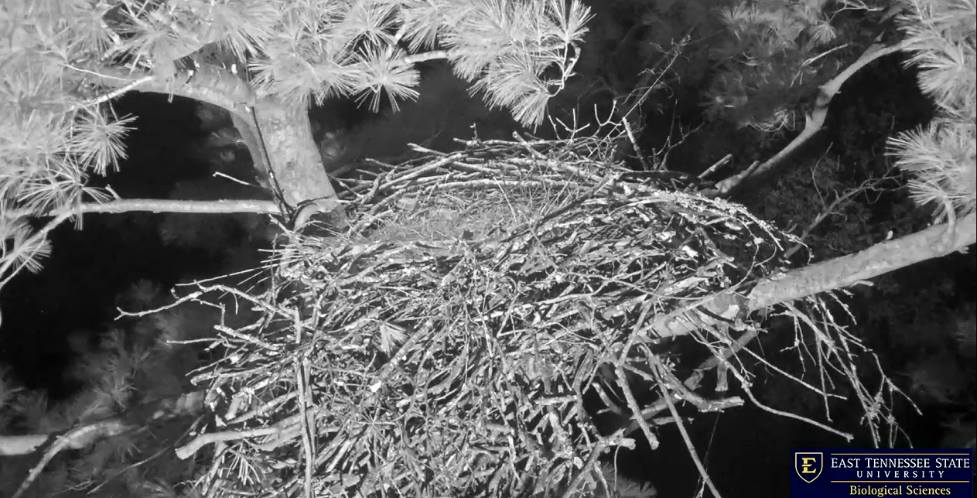 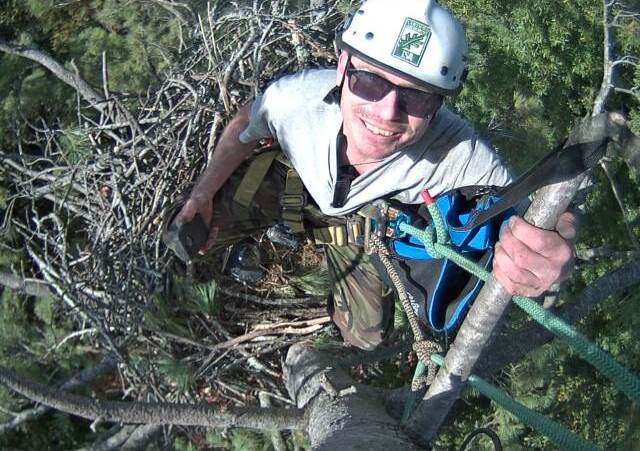 Brandon Bragg, our expert tree climber, scaled nearly 80 feet in order to install the  second camera directly over the Eagles' nest. This overhead view will allow us to better see the eaglets once they hatch.

This was an incredible year for both nests.  First, the Bluff City pair decided to move to a new site due to some raccoons invading their nest.  Dr. Alsop and crew put up some baffle to deter the raccoons but it was too late.  Once the eagles moved and set up a new nest the crew was not able to move the cameras until the end of the season.  Dr. Alsop and Kevin Brooks searched and found the new nesting site, made contact with the property owners and plans were made to move the cameras during the off season (Oct-Nov 2018).

The Johnson City pair made history with 3 eaglets this year.  A first since the nest has been studied.  All eaglets were healthy and hearty - so much so the nest fell apart the end of the season.  Dr. Alsop and his crew made plans to put up support and add baffling to the tree in October but the eagles beat them to it.  The Johnson City pair has been working feverishly to rebuild the nest before the expected eggs arrive in late February, early March.  Speedy the flying squirrel kept viewers entertained with his late night antics.  A few raccoons kept sneaking in and one was surprised when hit from behind by one of the eagles and went flying out of the nest.  The Facebook group has grown as people from all over the country enjoy asking questions or leave comments on the site.  The eagles are viewed from around the world and much loved by everyone.  We are looking forward to the upcoming season with both the Johnson City and Bluff City nests back online.

BC14 accidentally fledged on May 31, due to a branch breaking, and did not return for 3 days. However the eaglet was fine. Both eaglets returned in timely a manner before their final departure.

Based on the pictures capturing the growth of BC14 by the Cam Admin, a study was compiled showing eaglet development.  Click here to view the study

Both eaglets returned frequently before their final departure.

The Johnson City nest had two new cameras installed in the off-season, and Bluff City had an additional camera added for a second viewing perspective.

The big surprise this year was that Frances at the Bluff City, TN (BC) nest laid a third egg, all 3 hatched and fledged, but never returned to the nest or tree. Unfortunately, we had some sad news at the Johnson City, TN (JC) nest as Noshi went missing and Shima was left to raise the 2 eaglets on her own. The first few days were really hard on her, but with courage and strength she rose to the occasion and successfully raised both eaglets to fledge successfully.

Frances and Eugene surprised everyone with three eggs (BC Nest):

(despite being a little eaglet, BC18 was so tough he earned the nickname “ninja”.)

BC16 accidentally knocked BC17 off from a branch on May 29, with both falling.  Neither BC16 nor BC17 returned back to the nest.  The ground crew spotted one of them the next day.  BC18 fledged six days later and also never returned to the nest.  Frances and Eugene returned to the nest only a few times during this period, they had been gone for a while, and then returned in August to start 'nestorations' for the next season.

Statement from Dr. Fred Alsop Regarding Noshi, our Missing Eagle:

"Noshi is missing!" These are the first words I heard from our Chief EagleCam monitor, Michelle France, more than 10 days ago. Our male Bald Eagle from our well-established nesting pair in Washington County, Tennessee, had been missing since mid-afternoon on Friday, April 24th. Noshi and Shima had two big, growing 7 week-old chicks in the nest as this event occurred. Our Eagle Nation volunteers spend several days searching by foot, car and other means looking for our missing eagle. News was carried in our local newspaper, The Johnson City Press, and on our Johnson City WJHL TV station asking for any information that might lead to the discovery of Noshi’s whereabouts, or what may have happened to him.

In the meantime, a floater adult male Bald Eagle appeared at the nest site and this intruder’s presence also distracted Shima’s attempts to forage and provide food for the nestlings as a single parent. The good news is as of yesterday, May 4th, it seems that Shima has started to accept the new male in her territory, they are flying together, and she allows him perch in the top of the nest tree while she is out hunting. She is bringing in fish/food for JC15 & JC16, so things are not back to normal, but they are most definitely looking up!

The federal guidelines for live-streaming eagle cameras like ours come with many restrictions with the safety of the eagles their foremost consideration. We have had to agree to all of these in order to bring our live-streaming of our two local breeding eagle pairs to our eagle watchers for 5 consecutive years. One of these caveats is that there can be no human disturbance at an active Bald Eagle nest. This prevents us from doing anything in the vicinity of the nest, the nest tree, or the immediate area from the time the adults return to the nest site and begin adding sticks to their nest from previous seasons through the time the juvenile birds have fledged the nest for good.

We discussed possible plans to assist the nestlings, including perhaps removing them from the nest and placing them in a hack tower where they might continue to grow and mature until fledgling if Shima seemed to not be up to the task of providing for them. We did contact the American Eagle Foundation to seek assistance and they were most willing to render it provided we had permission from the U.S. Fish & Wildlife Service to remove the birds. We had a generous financial offer from a long-time supporter to pay for such a relocation project. I discussed this all with the Southeastern Regional Eagle Biologist for the USF&WS and was told that their position of no human interference would have to be upheld. This is the policy we agreed to from the very beginning, and I did not expect the Service to permit any special waiver for us to interfere with a natural event. We will have to watch what often happens in nature when some unforeseen event, such as our missing male bird, takes place. We now have the opportunity not afforded to many; to actually watch what our adult female will do to try to continue to raise her chicks alone, what the role of the new male in the area will become, and how all of this will turn out. As we have stated from the beginning of our live-streaming; this is a real reality show, and we may watch it play out from the comfort of our homes as live TV, but we cannot, and will not interfere with it.

I wish to thank all of our great volunteers and our eagle watchers for their concern, their thoughtful suggestions on this matter, and the hours they spent in the field searching for Noshi. I also am grateful to the American Eagle Foundation for their offered assistance, to our sponsor for the generous offer of support, and to the US Fish & Wildlife Service for their role in our entire project over the past 5 years. I also ask everyone’s understanding of all our decisions, as difficult as they may seem, and for your continued support of our live-streaming EagleCam Project. Without you, and all that you do, this educational project would never have happened. Please continue to enjoy the lives of our magnificent birds.

Eugene and Frances have been working on their nestorations since August the nest looks great! We wonder if she will lay 3 again this season? The IR is not operable this season, so we are sitting in the dark to see if we can hear her laying.

It has been confirmed by Dr. Alsop & the Biological Science Dept. that the female bird @ the JC nest is our dear Shima. There was a vote taken among the viewers for the naming of the new male @ the nest and it was announced on March 16th that the winning name is Boone! On the evening of March 23rd JC17 is accidentally pulled out of the eggcup on Shima’s talon and it fell from the nest. On April 14th, JC19 appeared lethargic and did not want to eat we thought that it just needed to cast a pellet. Sadly, JC19 cast a pellet on April the 15th around 6:04 am and passed away shortly after. We have no way of knowing what occurred to cause such an unfortunate event.

Thank You For Your Support!

Establishing the two EagleCams in upper East Tennessee was an outstanding success thanks to the work of many in our community, our region and around the globe. Working together with your help, we had an exciting inaugural year. The support of your expertise, your donations, your sponsorships and your faithful linking to our live streaming of the Bluff City and Johnson City pairs of Bald Eagles was unprecedented. We saw courting, nest building, egg laying, incubating and chick raising carried through from November 2015 until the chicks fledged and finally left the nests in July 2016. Your donations allowed us to purchase our equipment and pay our bills, which enabled us to bring the life of these eagle families to you. Your continued interest, your chats and blogs, your questions, and your enthusiasm created a community that tallied more than 1.35 million views this season by more than 800 thousand different viewers in at least 179 countries!

To donate, click on the “Give Now” button, located on the left hand side of your screen.

We thank you for your support!