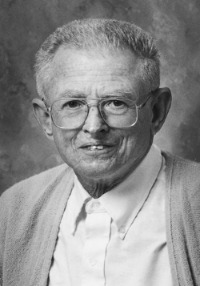 John C. Warden was born December 22, 1930, in Albuquerque, New Mexico. He began his educational studies at DePauw University in 1948 and later attended the University of Chicago, where he earned his A.B. and S.B. degrees in 1952 and 1955, respectively. During this time, he also served as a corporal with the United States
Army Medical Corps and maintained inactive reserve status from 1954-60. After receiving his S.B. degree, John completed a one-year term as a Robert Ridgeway Memorial Fellow, immediately followed by a two-year fellowship funded by the National Science Foundation. In 1959, he was hired as an instructor of botany at the University of Kentucky, where he remained until 1966 when he moved to Johnson City, Tennessee, to join the faculty of East Tennessee State University.

During his tenure at the University of Kentucky and ETSU, John directed more than 30 graduate theses. One of his responsibilities as an assistant professor in ETSU's Department of Biological Sciences was to oversee the departmental herbarium
a position he held with great pride for more than three decades until his retirement in 1997. While adding hundreds of new specimens to the university herbarium, John also consulted with representatives of local, state, and federal agencies, and private industries, on matters of conservation and environmental impact assessment.

John C. Warden died unexpectedly on July 17, 1999. He is survived by his wife, Joan, and their five children: Wendy, Robert, Charlie, Perry, and Tom.

John C. Warden Herbarium
The John C. Warden Herbarium will serve as a research center for undergraduate and graduate students in biological sciences, as well as a resource for governmental agencies and conservation groups interested in the distribution of rare and endangered plants in the region. The herbarium is housed in Rooms 330 and 331 in D.M. Brown Hall on the
East Tennessee State University campus.