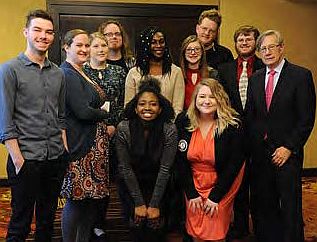 ATP students at Southeast Kentucky Community and Technical College (SKCTC) focused on two community projects.  The first project is Shewbuddy Radio, which records scenes from Higher Ground theatrical performances for radio broadcasts and then creates original interviews, music, and other recordings on the themes raised by the plays. Shewbuddy staff created podcasts of the on-air broadcasts during the summer of 2016, and piloted a new process for teaching audio and video production, including digital editing and publishing as part of several classes at SKCTC including the 2016-2017 ATP class. The course is part of SKCTC’s response to the POWER initiative, and preparing a workforce with 21st century digital skills.

The second project involved the Hurricane Gap Community Theater Institute, which was hosted by a number of community organizations. As part of the Institute, SKCTC operated an Introduction to Theater course as part of SKCTC’s ATP work. SKCTC students also were engaged as interns at the conference, taking part in the leadership of conference design and coordination.