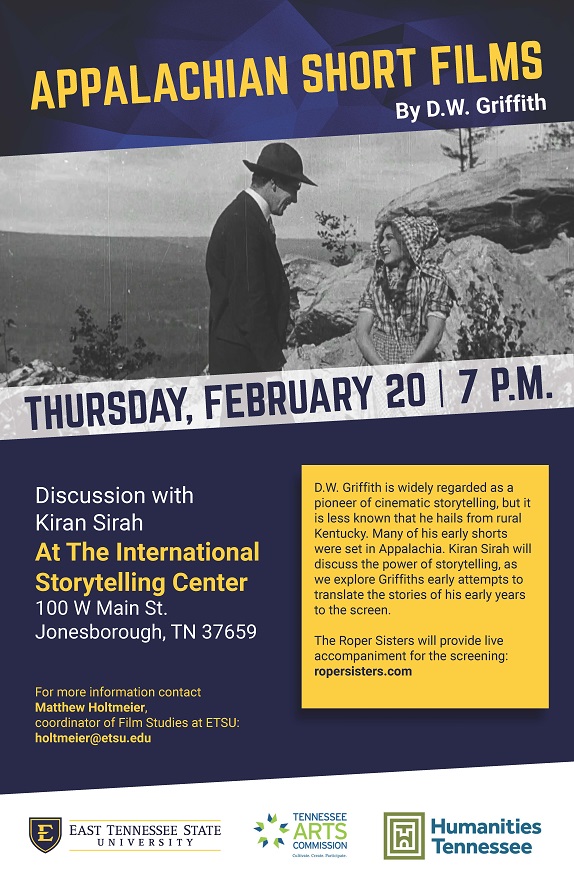 Due to Covid-19, our last screening event has been postponed. Please check back here for more information in the fall, or contact holtmeier@etsu.edu.

With live old-time/bluegrass bands accompanying classics of silent cinema, this series engages local audiences in East Tennessee in the history of film and Appalachia through a lecture and screening series.

D.W. Griffith is widely regarded as a pioneer of cinematic storytelling, but it is less known that he hails from rural Kentucky. Many of his early shorts were set in Appalachia. Kiran Sirah will discuss the power of storytelling, as we explore Griffiths early attempts to translate the stories of his early years to the screen.

Our Hospitality (1923), discussion with Ron Roach
POSTPONED at The Willow Tree

Star of early silent film comedy, Buster Keaton, heads to Appalachia in this retelling of the Hatfield-McCoy dispute. Director of the Appalachian Studies program at ETSU, Dr. Ron Roach will discuss the perniciousness of this myth about Appalachian history and culture.

With live old-time/bluegrass bands accompanying classics of silent cinema, this series engages local audiences in East Tennessee in the history of film and Appalachia through a lecture and screening series.

Oscar Micheaux is the first major African-American feature filmmaker, and his second film, Within Our Gates, responds to the racism of early cinema. Dr. Daryl Carter will discuss early race relations in Appalachia, in line with the themes of the film. This event is being held in partnership with the Tipton St Gallery’s Umoja Festival exhibit.

One of the classics of silent cinema, named a favorite by Mary Pickford and John Ford, with the rare distinction of being shot on location in Blue Grass, Virginia, not far from where the director Henry King was raised. Dr. Phyllis Thompson will discuss gender and masculinity in relation to this early Appalachian coming of age tale.