A benefactor of the School of the Arts

Mary B. Martin School of the Arts 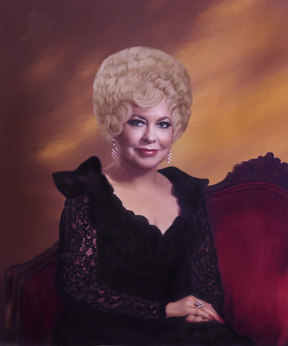 Mary B. Martin was a lifelong resident of Johnson City. She was born in the Boone's Creek community and graduated from Boone's Creek High School. She began a forty-four year career at Tennessee Eastman Company as a laboratory technician and later obtained a BS degree in chemistry from East Tennessee State University, studying nights and weekends while working full time at Eastman. After her graduation, she worked as a research chemist, doing exploratory work in new polymer systems. She was awarded two US patents.

Other than science, her interests included interior decorating, sewing, flower arranging and investing. Mary made the dress depicted in the photograph included here--a reproduction of a dress she saw elsewhere. She also enjoyed attending performing arts events. Mary had a long-term membership in the First Christian Church, the Monday Club, and the American Chemical Society.

Mary was married to James C. Martin, the benefactor of the School of the Arts, for forty-two years. Their daughter, Sonia King, and late son-in-law, James M. King, reside in Johnson City. Mary passed away on April 10, 2008.

Mary was described as a pleasant extrovert, and her charm and charisma are remembered in the community. She had a positive, can-do approach to life. Mary was smart and aggressive and had a belief system spiced with certain axioms and witticisms. She was a beautiful lady inside and out and was characterized as one in a million.