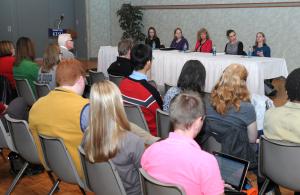 The college of public health student council hosted its first ever alumni career panel as part of the Alumni Return to the Classroom event for Homecoming 2012. The panel consisted of recent alumni from the college of public health from each of the major departments-Community and Behavioral Health, Epidemiology, Environmental Health, Health Services Management and Policy, and Health Sciences. The goal of the panel was to share with current students advice on how to effectively enter into, and excel in, the current workforce.

Mrs. Burnside graduated with her Bachelors in Health Sciences in 2003 and with her Masters in 2005. After graduating, she worked as a Validation Specialist and Industrial Microbiologist with Vi-Jon, Inc from 2006-2008. Since 2008, she has been at Western Carolina University where she is a Forensic Research Scientist. Erin also trained at the Federal Bureau of Investigation in 2011.

Mrs. Compton graduated from ETSU in 1987 with her Bachelors and completed her Masters in Environmental Health in 2007. Jan began working for the State of Tennessee in 2000 as the Environmental Coordinator. She currently works as Manager for the Office of Sustainable Practices with the Tennessee Department of Environment and Conservation.

Mrs. Masters graduated with her BSPH in 2003. She worked as a Health Educator with Washington County Health Department from 2004-2007. She was promoted to Regional Health Promotion Coordinator at the Northeast Tennessee Regional Health Office where she worked until 2011. Paula completed her MPH in 2009 along with a certificate in Health Care Management in 2007. She is the current director of Lifepath Public Health Training Center and is now working on her DrPH. Paula has been a member of the Tennessee Public Health Association since 2004 and was recently chosen as president-elect.

Ms. Christian Williams, a two time alum of the college and current DrPH student in the Department of Community and Behavioral Health served as moderator.