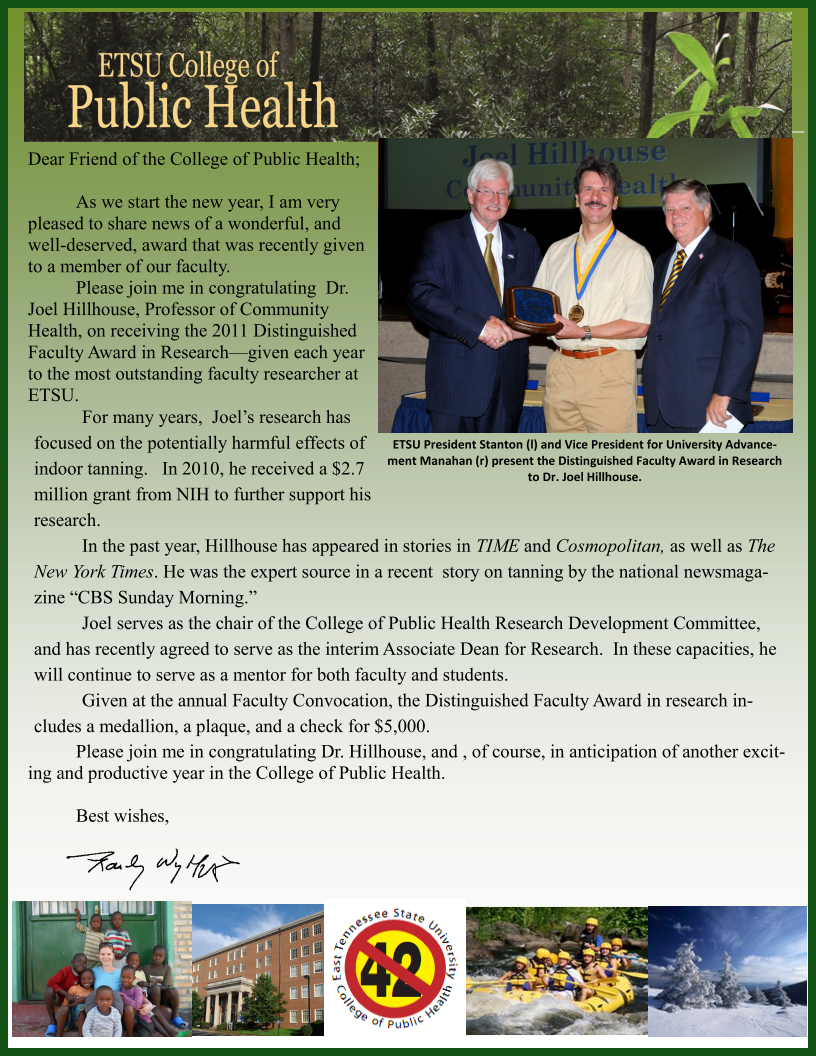 Dr. Joel Hillhouse, Professor of Community Health, was recognized at the annual faculty convocation with the receipt of the 2011 Distinguished Faculty Award in Research.  The award, which includes a medallion, a plaque, and a check for $5,000, is given to the outstanding faculty researcher at ETSU.

Hillhouses research focuses on the potentially harmful effects of indoor tanning and the behaviors that prompt teens and college students to tan even when they are aware of its link to skin cancer. His innovative work has been consistently supported by a variety of grant funding sources.

In 2010, Hillhouse received a $2.7 million grant from the National Institutes of Health (NIH) to devise a program that, through the creation of a Web site and the use of social media, could dissuade teens from tanning and lower their risk for developing skin cancer.

Hillhouses research is frequently published in scholarly journals. The bulk of his 38 peer-reviewed papers have addressed the topic of skin cancer prevention related to tanning, and two of his four published book chapters are also on the subject. Through his body of work, he has become one of the nations leading experts in his field.

In the past year, Hillhouse has appeared in stories in the magazines TIME and Cosmopolitan, as well as The New York Times. He was the expert source in an August 2011 story on tanning by the national newsmagazine CBS Sunday Morning.  Over the past decade, his research has been sourced in the popular media at least 135 times, and colleagues have cited him no less than 850 times in scholarly literature.

Writing in support of Hillhouses nomination for the award, Dr. Randy Wykoff, dean of the College of Public Health, praised him for not only expanding his own research portfolio, but also that of others in the college. He has been an active researcher even while carrying a heavy teaching load, Wykoff added.

Dr. Hillhouse has served as chair of the College of Public Health Research Development Committee, which means he has been using his scholarly expertise to expand the research capability of the college, Wykoff wrote. He has also exhibited a remarkable focus on helping new students develop their research careers. The fact that he has allowed his students to not only have first author designation on their joint papers but to also allow them to share in the media spotlight reflects his very significant commitment to helping create the next generation of scholars.

Dr. Hillhouse has recently accepted the position of interim Associate Dean for Research for the College, further expanding his commitment to helping develop and expand the research base for the faculty.