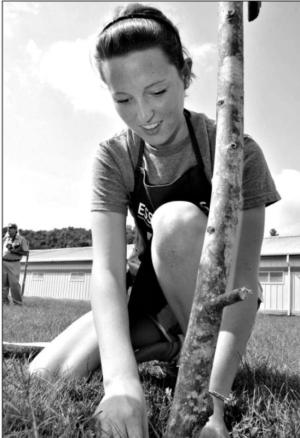 Tortillas you eat probably came from a bag packed by a guy in a factory downtown. Or some other factory, maybe. But tortillas eaten by East Tennessee State University students in the Roan Scholars Leadership program Friday night came by the sweat of their own brows and the blisters on their hands.

The students participated in a teamwork and leadership building exercise called "The Tortilla Experience" at the ETSU Valleybrook Campus on Friday afternoon and evening. Randy Wykoff, public health dean, said the half-day exercise was designed to teach teamwork and problem-solving and develop leadership.

The idea was that over the course of a few hours, the students would do everything necessary to make a tortilla, including clearing a field, fencing off the field, planting corn, harvesting corn, grinding corn, shaping tortillas, making a brick oven, making bricks with which to build that oven and baking the tortillas.

Before eating the tortillas, they had to wash their hands with a field hand-washing station they had made out of sticks, a water jug and a weight. "All of those are hands-on practical skills that they'll do today," Wykoff said. Just to be clear here, there was already corn available to be ground and made into tortillas, so nothing really had to be grown. There were already dried bricks to use to build the ovens, too, so there was no waiting for bricks to dry.

This training program was developed by the College of Public Health as part of an academic course called "essential"
that charges students with participating in several tasks related to agricultural practices from around the world. Scott Jeffress, Roan Scholars director, said the experience was a good learning opportunity in several ways.

"Leadership is all about people and problem-solving," Jeffress said, adding that the students would certainly have to figure things out as they worked throughout the day. "Also at the same time getting exposure to some problems that a lot of people in the world face, and that they as leaders, maybe they have some solutions to," Jeffress said.