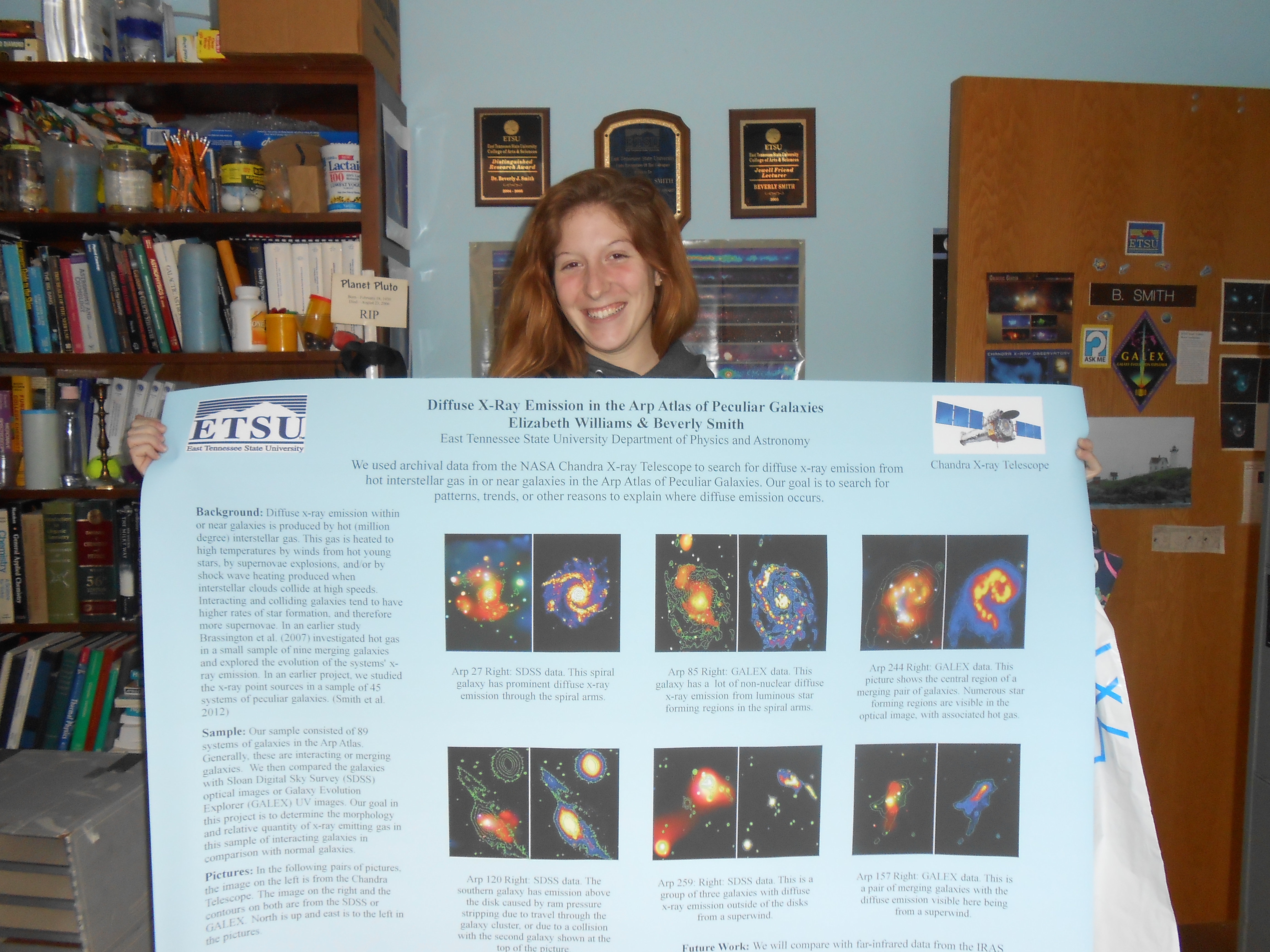 Alyssa Adams thesis On April 17, 2013, Physics major Allysa Spooner Adams gave a seminar in the Department on her Honors thesis. Her thesis is titled 'Exploring the Properties of Mira-Type Stars with Spectropolarimetry'. 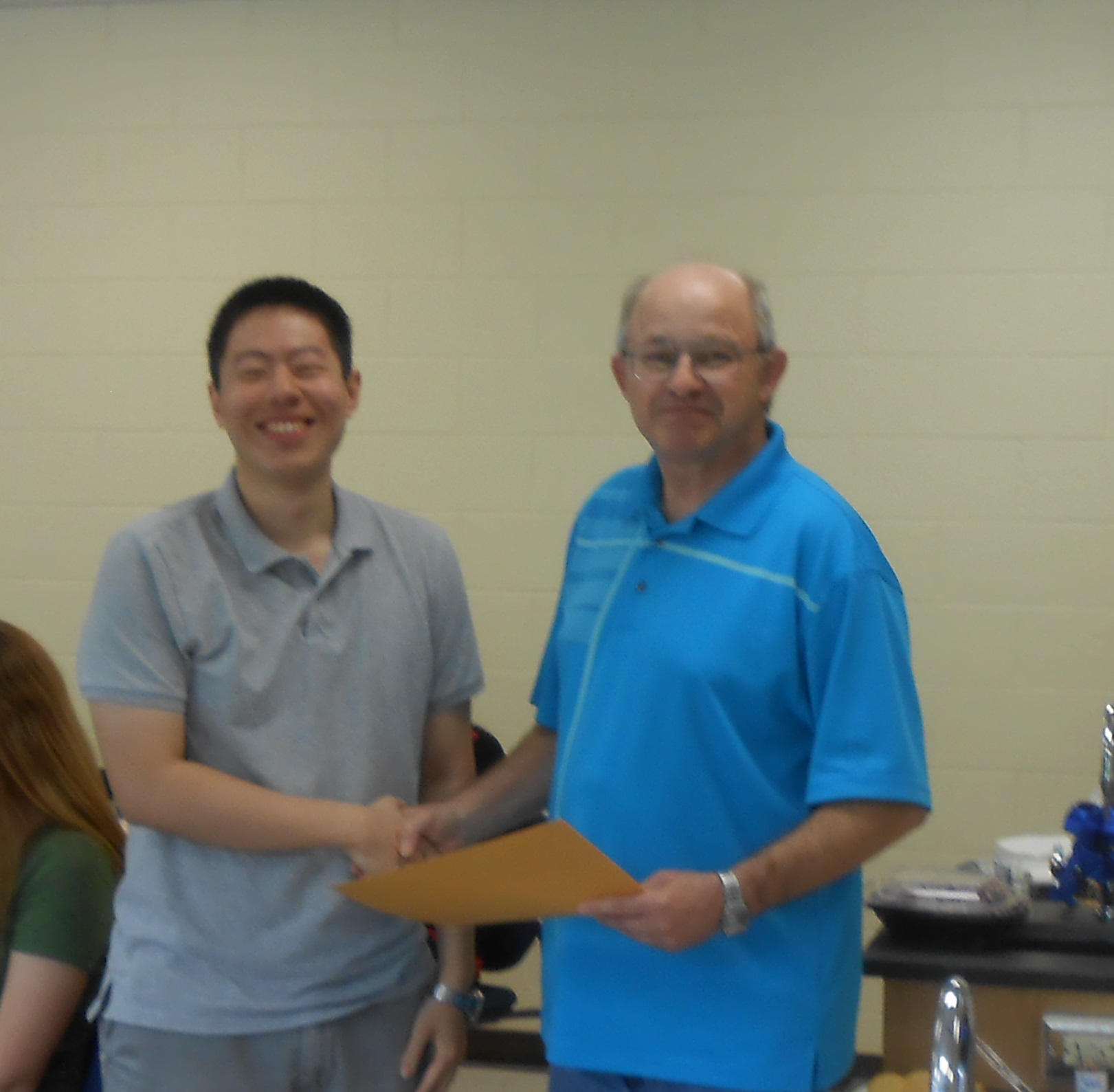 X Wang During the Spring 2013 Department party, Xiqiao Wang (shown to left) was awarded the Outstanding Student in Physics Prize for 2013, for being the graduating senior Physics major with the highest overall GPA. In this picture he is shown with Department Chair Don Luttermoser. A total of 10 physics majors won 'Graduating with Distinction Prizes' this year, awarded to those Physics Majors with a GPA of 3.50 or higher: Alyssa Spooner Adams, Chance Brown, Laura Buchanan, William Jamieson, Terrance McDermott, Erin Middlemas, Olivia Miller, Brittany Self, Brandon Sexton, Pashupati Shah, and Xiqiao Wang.

Another picture from the Spring 2013 Department party is shown to the left. On left, in front, is Terrance McDermott. On right in front (partially cut-off) is Elizabeth Williams. Standing in far back to left is Dr. Rico Ignace. In the pink shirt with the hat is Brandon Sexon, sitting next to Olivia Miller.

An article about Physics graduate Moises Serrano (class of 2005) and his Ph.D. research appeared in the Fall 2012 issue of Illuminated Magazine, a publication about ETSU graduate research. Moises is now a Ph.D. candidate in the Biomedical Sciences program.

Walter Ryan Deskins (class of 2008) has accepted a position as the course director of physical science at Full Sail University in Orlando Florida. After leaving ETSU, he obtained an M.S. degree in Physics from Florida State University.

Physics graduate Sharon Gray (class of 2009) visited the Department January 28, 2013, and gave a seminar on her master's thesis in Biomedical Engineering, which completed at the University of Tennessee Space Institute. Her talk was entitled 'An Investigation of Rare Earth Co-doping in Fluorochlorozirconate Glass-Ceramic Imaging Plates to Improve the Storage Phosphor Properties for Computed Radiography'. She received her master's degree in May 2013.

Ryen Lapham (Class of 2011) visited the Dept Monday April 1, and gave a seminar on 'Far-Infrared Emission Lines in Lenticular and Early Type Galaxies'. Ryen is now a graduate student in the Physics Department at New Mexico Tech.

Dr. Hilding Neilson started a position in the Department as a post-doctoral researcher in Fall 2012. His research is in stellar atmospheres and stellar evolution, including radiative transfer. Hilding obtained a B.Sc. degree in Astrophysics from St. Mary's University, Halifax, Canada, and a Ph.D. in Astronomy from the University of Toronto, Toronto, Canada.

Dr. Mark Giroux was named one of the 'Ten Top Teachers at ETSU' in the February 27, 2013 issue of the East Tennessean Student Newspaper.

Kristen CampbellPhysics major Kristen Campbell is working this summer in the ETSU Dept of Physics and Astronomy with Dr. Beverly Smith on research involving X-ray images of interacting galaxies from the NASA Chandra telescope.

Hannah GreenePhysics major Hannah Greene is working in the ETSU Dept of Physics and Astronomy with Dr. Beverly Smith on multi-wavelength studies of star forming regions within interacting galaxies.

Moises Serrano Physics graduate Moises Serrano (Class of 2005) defended his Ph.D. dissertation on Friday June 21, 2013. He is a graduate student in the Biomedical Sciences program in the Quillen College of Medicine at ETSU. His thesis was titled 'Novel Roles of RPA Phosphorylation in Cellular Response to DNA Damage'.

Chris CarverPhysics graduate David Chris Carver (Class of 2009) started work tthis summer as a Resident Physician at the Campbell Clinic for Orthopedic Surgery in Memphis Tennessee. Chris obtained his M.D. at Quillen Medical School at ETSU in May 2013.

Physics major Erin Middlemas attended the 53rd annual meeting of the American Physical Society division of Plasma Physics, held from November 14-18th in Salt Lake City. She was a co-author on a presentation entitled ' Effects of dust on the optical emission and electrical properties in a dusty plasma experiment ' by V. Land, A Paro, E. Middlemas, J. Carmona Reyes, A. Douglass, L. Matthews, and T. Hyde.

Her poster was entitled 'Phase Lags and Shapes of Light Curves of Oxygen Rich Mira Variables'.

Two Physics majors and one Physics minor gave talks at the Boland Undergraduate Research Symposium, held at the Millenium Centre April 3, 2012. Olivia Miller gave a talk on 'Design of a High Resolution Imaging System for Ultracool Atoms', while William Jamieson gave a talk entitled 'Peaks and Valleys in Graphs, Part 2'. A talk on 'Peaks and Valleys in Graphs, Part 1' was given by Physics minor Jessie Deering.
Two Physics majors and one Physics minor presented posters at the Appalachian Student Research Forum, held at the Millenium Centre in Johnson City on April 5, 2012. Erin Middlemas presented a poster on 'Estimating Soliton Solutions of the Non-Linear Schrodinger Equation', while William Jamieson presented a poster entitled 'Hitting Set Size for Random Set Systems: The Quarter Pounder Approach'. Physics minor Jessie Deering was a co-author on the second poster.

Jessica Webb Don Luttermoser Spring 2012 Physics major Jessica Webb won the Outstanding Student in Physics Award for 2011/2012, as the graduating senior with the highest overall GPA. She is shown in this picture with the Department Chair, Dr. Donald Luttermoser.

Harry Powell Mike Houchins Fall 2011Physics Department Alumnus Mike Houchins (class of 2001; on right in photo) visited the Department on Monday October 3, 2011 and gave a presentation at the Physics seminar on his work at Liquidia Technologies.
His presentation was titled ' Pattern Replication In Non-Wetting Templates: An Introduction to Liquidia Technologies and the Novel PRINT™ Platform'. In addition to his formal presentation, Mike spent time talking to current students about his career path and training. In this photo, he is shown with retired Department faculty member Dr. Harry Powell (on left), who attended Mike's presentation. After his graduation from ETSU, Mike received an M.S. degree in Material Science from Clemson University in 2006.

Rick McGill Harry PowellPhysics Department Alumnus Rick McGill (class of 1996) visited the Department on October 31 2011, and gave a seminar on his work at Eastman Chemical Corporation. Rick is now a Principal Physicist at Eastman. His talk was titled 'Physics as a Career: No Tricks and No Treats'. In this photo, he is shown with retired Dept faculty member Dr. Harry Powell (on right), who attended the presentation.

Jason Beaulieu Elizabeth Williams Spring 2012Physics major alumnus Jason Beaulieu (Class of 2010) gave a seminar in the Department on April 23, 2012. He is currently completing his Master's Thesis in Mechanical Engineering at Virginia Tech. His talk was titled ' A Dynamic, Interactive Approach to Learning Engineering and Mathematics'. He will be starting work at OSIsoft Corporation in Johnson City in May. In this picture, he is shown with current Physics major Elizabeth Williams.

Greg LoveDr. Greg Love started a position as Full Time Temporary Instructor in the Department this fall. Dr. Love has a Ph.D. in Analytical Chemistry from Kansas State University.

Sabrina Hurlock (Class of 2010) has started graduate school this summer in Engineering Science at the University of Tennessee Space Institute.
Jason Beaulieu (Class of 2010) started a new job at OSIsoft Corporation in Johnson City. Jason completed a masters in Mechanical Engineering from Virginia Tech this spring.

Jessica Webb (Class of 2012) will be teaching at Unicoi County High School starting in Fall 2012
Physics graduate Jesse Delatte (class of 2010) has been teaching English in China for the last two years.

Dr. Tabetha Hole will be starting a visiting faculty position at Weber State University in Utah this summer. She is currently a post-doctoral researcher in the Department.

General
The Dept, in conjunction with the Bays Mountain Astronomy Club, hosted a public viewing of the Venus Transit on June 5, 2012. For pictures, see the Johnson City Press web site.

Physics major Thomas Gemmer graduated from ETSU in August 2010 with a Bachelors of Science in Physics degree.

Eleven Physics majors were awarded 'Learning Experiences in Astronomy and Physics' (LEAP) scholarships from a new program funded by the NASA Tennessee Space Grant program and the ETSU Foundation. For more information about this scholarship, click here.

Physics Major Ryen Lapham participated in 'Posters at the State Capitol Day' in Nashville TN in February 2011. At this event, undergraduates from various Tennessee Universities presented posted on their research to the state legislators. Ryen's poster was on 'Star Formation in the Interacting Galaxy Arp 107'. The press release on this event is posted here.

Several Physics majors and Physics/Astronomy minors gave presentations at the Boland Undergraduate Research Symposium and/or the Appalachian Research Forum, held at the Millenium Centre in Johnson City across the street from ETSU March 22 and 24, respectively. These presentations included the following talks:

'Double Domination of Graphs and their Complements'

Graduating Senior Coral Franklin won the 'Outstanding Senior in Physics' award for 2011, for having the highest overall GPA.
In this picture, she is posing with the food for the annual spring Department lunch in honor of our graduating seniors.

Here are two additional pictures of physics majors from the Spring 2011 Dept lunch. On the left is Brett Bailey; on the right is Josh Kindle.

Sharon Gray (Class of 2009) started graduate school in Material Science and Engineering at the University of Tennessee Space Institute.

Qiongge Li (Class of 2010) started graduate school this fall in Physics at the University of Georgia.

Daniel Phillips (Class of 2010) started graduate school this fall in Microbiology at the University of Maryland in Baltimore. At ETSU, Daniel was a double major in Physics and Biology.

Weisong Tu (Class of 2010) started graduate school in Physics this fall at the University of Tennessee at Knoxville.

R achel Baker (Class of 2005) started a new job teaching physics at Daniel Boone High School in Fall 2010. She received an M.S. in Education from ETSU in 2009.

Renovations are now complete at the ETSU Planetarium. Dr. Henson oversaw the installation of the new digital Digitarium Planetarium in addition to new seating, air conditioning, and flooring. Dr. Luttermoser installed a new 5.1 audio system using a Sony-ES surround audio/video receiver, a Sony DVD player, and Paradigm Monitor-series speakers. Funding for the renovations was provided by the ETSU Technology Access program and the ETSU 'Friends of Astronomy' Foundation account.

Physics major Erin Middlemas is participating in a Research Experience for Undergraduates program at Baylor University this summer. Her summer research involves studying the effects of dust particles on argon plasma.

Physics major Olivia Miller is participating in a Research Experience for Undergraduate program at Bucknell University this summer. She is working with Dr. James Higbie designing and building an imaging system that will be used to obtain images of Bose-Einstein Condensates and their interactions.

Physics major Jessica Webb is working this summer in the ETSU Dept of Physics and Astronomy with Dr. Beverly Smith on research involving infrared observations of variable stars from the COBE/DIRBE satellite

Physics major Chance Brown is working this summer in the ETSU Dept of Physics and Astronomy with Dr. Richard Ignace on models of polarization in stars.

Drs. Richard Ignace, Gary Henson, and Tabetha Hole attended the 'Stellar Polarimetry: Birth to Death' conference held in Madison in June 2011. Dr. Ignace presented a poster entitled 'Considerations of the Hanle and Zeeman Effects in Oblique Magnetic Rotators'. Dr. Henson had a poster entitled 'Optical Polarization Observations of Epsilon Aurigae During the 2009-2011 Eclipse', while Dr. Hole had a poster entitled 'Can We Detect Clumpiness in Supernova Ejecta?' Dr. Ignace was a member of the Scientific Organizing Committee for this meeting.