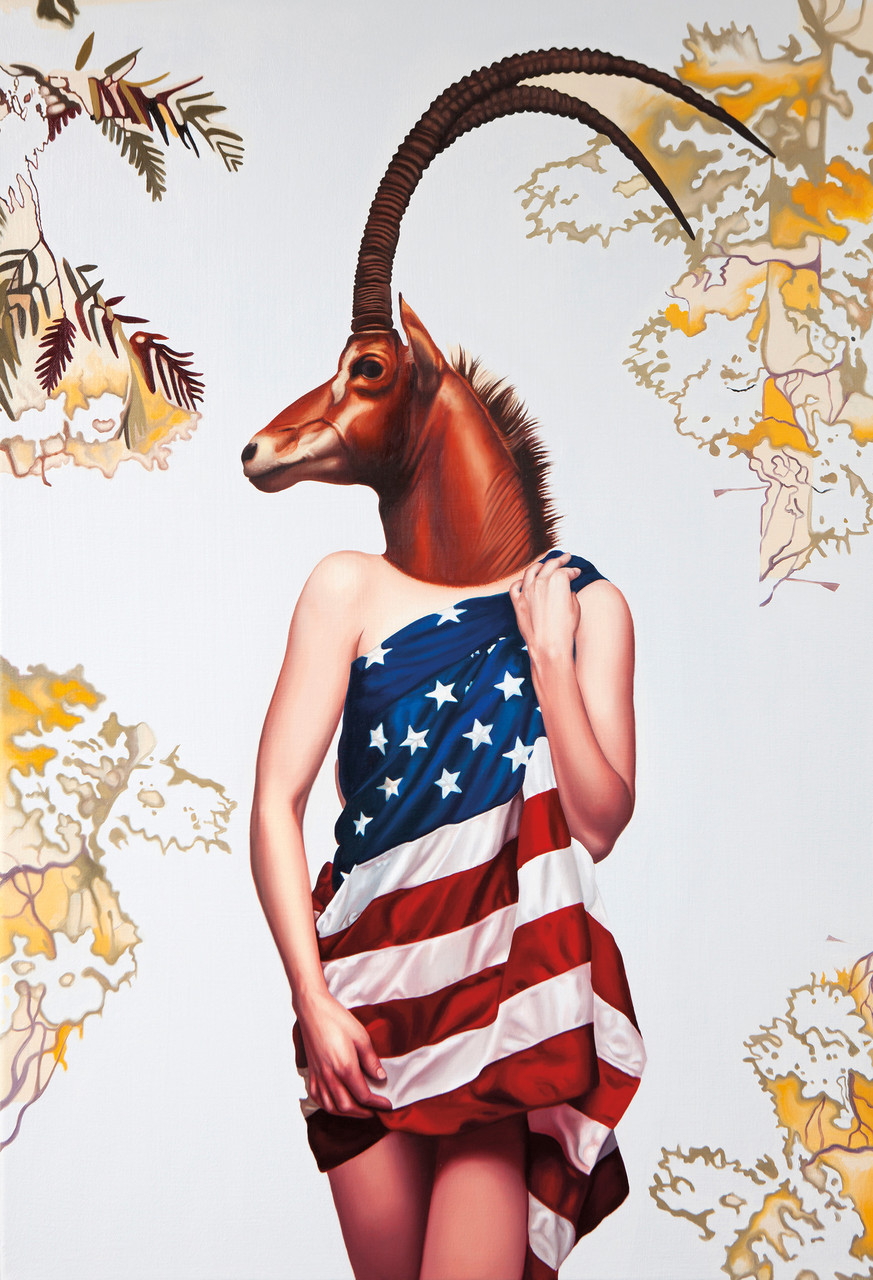 Though the halves often overlap, American Woman is a two-part exhibition; divisions are an integral part of today's U.S.A. The American gallery brings together works that speak to the evolving political, social, and physical terrain of our country. The Woman gallery illustrates that in our time, shifting definitions of and expectations for women are as compelling to artists as the female form has always been.

In an election year these subjects seem especially pertinent. One candidate promises to "Make America Great Again," while another promises to end income inequality for hard-working women. Despite their differences, candidates on both sides of the party divide invoke the stars and stripes without hesitation. Artists from coast to coast are also on the front lines as battles rage over shifting definitions of "American" and "woman" in the 21st century.

Emily Burns' painting, 'Like an American,' bridges the divide between this exhibition's sections. She offers us a kitschy Venus with slender, supple limbs and an antelope's head, suggestively draped in an American flag. In ancient Egypt, boats decorated with antelope heads were sacred to Sokar, the god who watched over the royal cemeteries near Memphis. This cross-cultural mash up also seems apt for this melting pot of an exhibition. Memphis in this case references ancient Egypt's northern capital, but it renders the painting an even more fitting emblematic figure for this Tennessee exhibition.

American
What does "American" look like? Christopher Luhar-Trice, Daniel McClendon, Steve Subotnick, and John Thrasher employ iconic images that harken back to an idealized America. Often they are symbols of American strength and bravery: the rocket that took the first American into space, the classic cowboy, and the stoic bison. But these artists recast them for today's audiences. For instance, Subotnick's animated silhouettes appropriate the garb of colonial Americans, but exhibit the kind of anxiety that is so familiar to its present day citizens. The iconic dome of our nation's Capital may no longer be an apt mascot for America; Capitalism reigns supreme and Kim Suyeon's work reflects this. Suyeon encases receipts in frosty glass forever preserving corporate logos including that of Lowe's, itself surrounded by the form of a house − the American dream now more embodied in big box stores than in home ownership. Carol Sogard employs the traditional craft of weaving, which has deep roots in Native American communities, but rather than bind thread she weaves plastic bags together. This material is what our civilization will leave behind for future archaeologists, perhaps plastic will one day line the walls of museums alongside Navajo textiles and pottery shards. As you view the works in this half of the exhibition, pause to think of them as an overall statement, a narrative about a singular nation made up of many opinions and experiences.

Woman
What defines today's woman? Is she a mythical creature, a seductress, a survivor, or a force to be reckoned with? The artists in this gallery prove that she is all of these and more. Kelly Hider and McKinna Anderson explore girlhood at different stages, from the glittering wonder of tea parties to life on the verge of full blown womanhood, where a sorority sister holds her most prized treasure by her side, not a teacup but a cell phone. Gary Beeber's 'Mona', a transgender woman, is seen surrounded by her own treasures: photos from femininity's golden age, when silver screen queens ruled the world with a grace and beauty that seems far deeper in our past than it really is. Douglas Balentine's women are treasures themselves with faces etched by experience and bodies as strong as warships; in their strength they challenge the notion that youthful, delicate women are most valuable. On the other hand, Jessica Wohl's collages present women whose very identities are obscured by the trappings of the beauty myth, their spines made of bobby pins and legs slathered in bronzer. Elham Masoudi forces us to actively confront the complex forces that threaten to control the lives of women with an installation that requires audience participation. As you observe the diverse women on these walls, consider what a single prototypical American woman of today would look like; it's unlikely she'd bear any resemblance to the Statue of Liberty.