History of The Slocumb Galleries

The Slocumb Galleries with the Tipton Gallery are exhibition venues for the Department of Art & Design under the College of Arts and Sciences at East Tennessee State University. The Slocumb Galleries at ETSU promote the understanding, presentation and appreciation of visual arts in support of the academic experiences and the cultural development of the region, through collaborative programming with various units and community institutions. Our Mission is to develop creative excellence, foster collaborations, promote inclusivity and encourgae critical thinking by providing access to and serving as platform for innovative ideas and diverse exhibitions.

Named after Prof. Elizabeth Slocumb, an art teacher at ETSU, (then, as East TN Normal School in 1911) and first Chair of the Department of Art & Design, the Slocumb Galleries operate three venues: the two adjoining exhibition spaces in Ernest C. Ball Hall and the Tipton Gallery in Downtown, Johnson City.

The Slocumb Galleries are open Monday thru Friday from 9:00 a.m.  to 5 p.m. with extended hours on Thursdays until 6 p.m., during receptions, group tours and by appointment. Located at Ernest C. Ball HAll,  232 Sherrod Drive (beside Mathes Hall  just after the  roundabout), at ETSU campus.

Programming are supported by ETSU Department of Art & Design, the College of Arts & Sciences, the Honors College and the Office of the President. In partnership with various units at ETSU and funding support from the Student Activities Allocation Committee (SAAC) Funds, Student Government Association (SGA) B.U.C. Funds, the Mary B. Martin School of the Arts, Friends of Slocumb Galleries and the Tennessee Arts Commission. 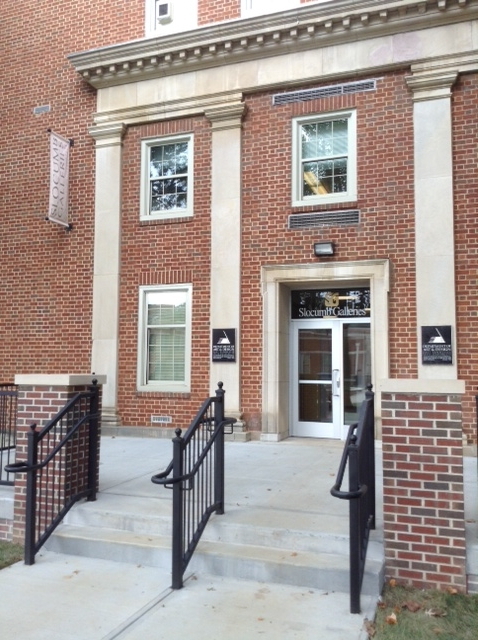 Art at ETSU: A Brief Look

On October 1911, East Tennessee State Normal School opened its doors to local residents with eight departments and twenty-three faculty members. Initially, the drawing classes were offered by Ms. Elizabeth Slocumb under the Manual Training Department as part of the Domestic Arts program, before she became the first Chair of the Department of Art. The Slocumb Galleries, under the Department of Art & Design was named in honor of Ms. Slocumb in recognition of her contribution to the advancement of visual arts education at ETSU after her retirement in 1952.

As ETSU expanded from a four-year teacher's college in 1924 to a full state college in 1943 and finally into East Tennessee State University in 1963, the Department of Art grew with it, graduating many undergraduate and graduate students, holding exhibitions, adding new concentrations and faculty and being accredited by the National Association of Schools of Art and Design (NASAD) since 1983.

BS Art Education dominated the program in its early years. In the Fall of 1955, the first art education TV program in the state was hosted by then faculty Dr. Crystal Theodore hosted via WJHL Studio. By the 1960s, courses leaning towards the fine arts were offered in enameling, ceramics, weaving, drawing, painting, sculpture and printmaking. For years, the department classrooms, studios and Slocumb Gallery were located at the building that now houses the B. Carroll Reece Museum.

In 1965, under the chairmanship of Prof. John Benz, the Art Department was relocated to Ernest C. Ball Hall, enabling the expansion of programs to include photography and graphic design and later, art history. By the end of the decade Tennessee approved graduate programs, and in 1987 the university created the photography laboratory and expanded the Slocumb Galleries into two spaces and constructed the Art Annex along Seehorn Drive that now houses ceramics and sculpture programs.

In 2004, international artist Mel Chin became part of the ETSU family as Wayne G. Basler Chair of Excellence for the Integration of the Arts, Rhetoric, and Science. Art historian Dr. Molly Faries (2010) and SAIC exhibit director  and influential curator Prof. Mary Jane Jacobs (2013-2014) also became part of the Basler Chair art circle alongside Mel Chin. Aside from adjunct faculty, the College of Art and Sciences has allocated Visiting Faculty positions for the Department of Art & Design since 2009.

In July 2006, the Department of Art & Design hired its first full time Gallery Director, Karlota Contreras-Koterbay. In 2007, with directives from former chair, Prof. M. Wayne Dyer, the SG Director in partnership with the Urban Redevelopment Alliance (URA) established the Tipton Gallery in Downtown Johnson City through benefactors David Pennington and later on Brandy McKinney for JC Ventures and URA. With support from various groups and individuals that make up the Friends of the Slocumb Galleries, this venue that was initially dedicated for student exhibitions has evolved into one of the more dynamic art venues in downtown JC featuring exhibitions by local, regional and emerging artists nationwide. Through the Slocumb Galleries, the ETSU Department of Art & Design has also expanded its permanent Collection to include a grant of 151 original Andy Warhol original photographs as part of the nationwide Warhol Photographic Legacy Program in 2008, and ten (10) original Warhol prints in 2014. Furthermore, upon the recommendation of former chair, Prof. Catherine Murray, the Slocumb Galleries has started its Internship Program through the ETSU Career and Intership Services in 2011. Consequently, SG Director Contreras-Koterbay formally organized the Slocumb Galleries Student Society (SGSS) with the interns as founding officers of the student club.

The Slocumb Galleries' Visiting Artists and Exhibition programs has benefited greatly from the formation of the Mary B. Martin School of the Arts (MBMSOTA) in 2009, named in honor of benefactor James Martin's late wife, Mary. This significant move to create an umbrella organization that has the primary purpose is a maturation in the academic and private sectors' commitment to the development of the arts in the region as articulated by the University Planning Committee's Strategic Plan in 2008, "To enhance the scope and quality of ETSU's programming in the fine and performing arts and to expand its contribution to the region's cultural climate."

On October 2010, the Slocumb Galleries organized the 'Reunion: Invitational Exhibition of 100 Art Alumni' to celebrate the achievements of the students and alumni of the Department of Art & Design. As ETSU celebrated its centennial in 2011, it has produced artist, cultural workers, art educators who have made a mark not only in the local and regional communities but in the national, and even international arena as well. Alumni have continued their higher education, received grants, received employment and publication as well as offered artists residencies from prestigious institutions such as Fulbright Scholar Program, the School of the Art Institute of Chicago, New York University, Pratt Institute, the Armory Art Center, National Geographic, the Discovery Channel, Lockheed Martin Aeronautics Company, Franz Masereel Center for Printmaking in Belgium, NES Artist Residency of Skagaströnd in Iceland, University of Georgia in Athens, San Francisco Art Institute, Yale University, and Rutgers University to name a few.

The Slocumb Galleries has partnered with various units and departments within ETSU and the local communities such as the Mary B. Martin School of the Arts, the Office of the Dean at the College of Arts & Sciences, the School of Graduate Studies, Division of Theater and Dance, the Women's, Gender, and Sexuality Studies, Office of Multicultural Affairs, Office of International Studies and Services, Fine & Performing Arts Program at the Honors College, the Department of Language and Literature, the Department of Communication, the Student Government Association, the Black Affairs Association, OITA Student Group, School of Continuing Studies, the Johnson City Area Arts Council and the Boys & Girls Club of Washington County, Nelson Fine Art Center, girls inc. foodtopia, the Urban Redevelopment Alliance (URA), Tennessee Crafts (formerly TACA), Kingsport Arts, Tennesseeans for the Arts, Tennessee Arts Commission among others. These partnerships and collaborations enables Slocumb Galleries to achieve its mission to provide access to contemporary art and promote the visual arts in the region. To all our partners and to the students and members of the community who visit the exhibitions and activities, we are indebted to you and you have our heartfelt appreciation and gratitude.