ETSU Physics graduate Austin Patrick (Class of 2016) started graduate school in Medical Physics at the University of Wisconsin-Madison in summer 2016.

Physics major Brianne Dunn is working in the Department this summer with Dr. Beverly Smith, doing research on interacting galaxies.

Physics major David Frost is working in the Department this summer with Dr. Frank Hagelberg.  He is doing research on quantum dots.

Physics major Cole Woo is working in the Department this summer with Dr. Richard Ignace.  He is doing research on stellar winds.

Physics major Macon Magno is doing research on stellar spectroscopy  this summer.  He is working in the Department  with Dr. Gary Henson.

Physics major Ashton Morelock is working in the Department this summer on a research project  involving micro- lensing.  She is working with Dr. Richard Ignace.

Physics minor Logan Norton is working in the Department this summer on a research project with Dr. Frank Hagelberg.  He is studying the optimal geometry for carbon nanostructures. 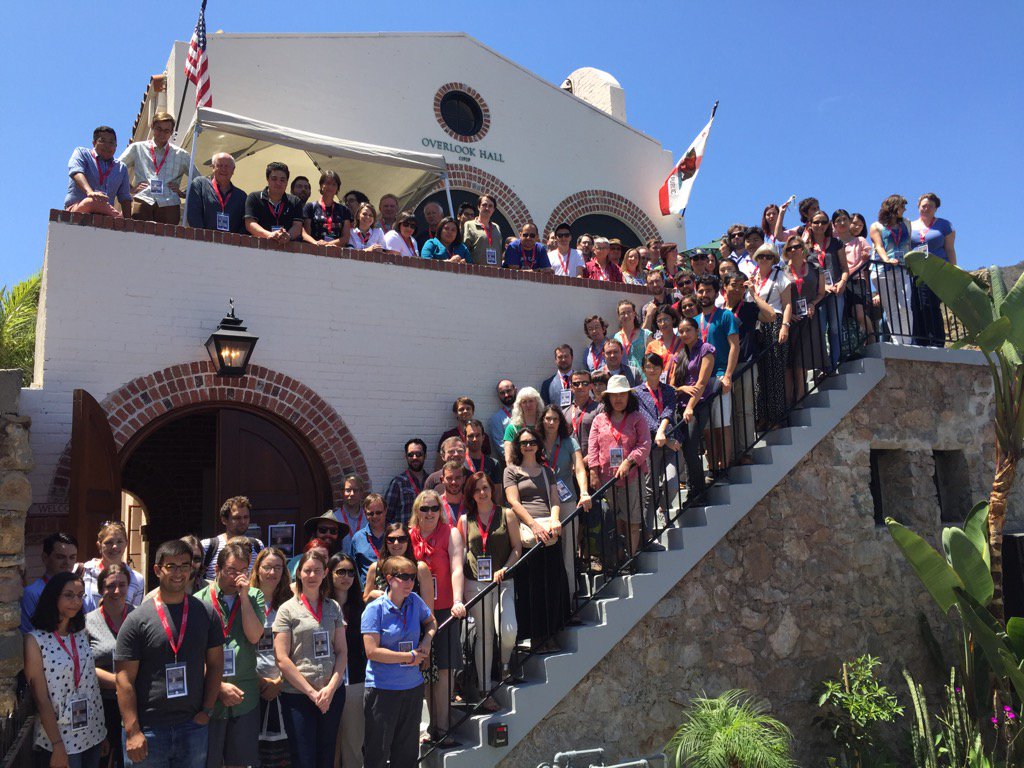 On May 9, 2016, the Department hosted a public viewing of the transit of Mercury, in conjunction with the Bays Mountain Amateur Astronomy Club.  The viewing was held on the ETSU campus.  ETSU Physics majors Macon Magno (left) and Ashton Morelock (right) assisted at this event.

The American Institute of Physics named the ETSU Physics and Astronomy Department as a `Top Performer' among Universities and Colleges without graduate programs in Physics.  For more information, click here. 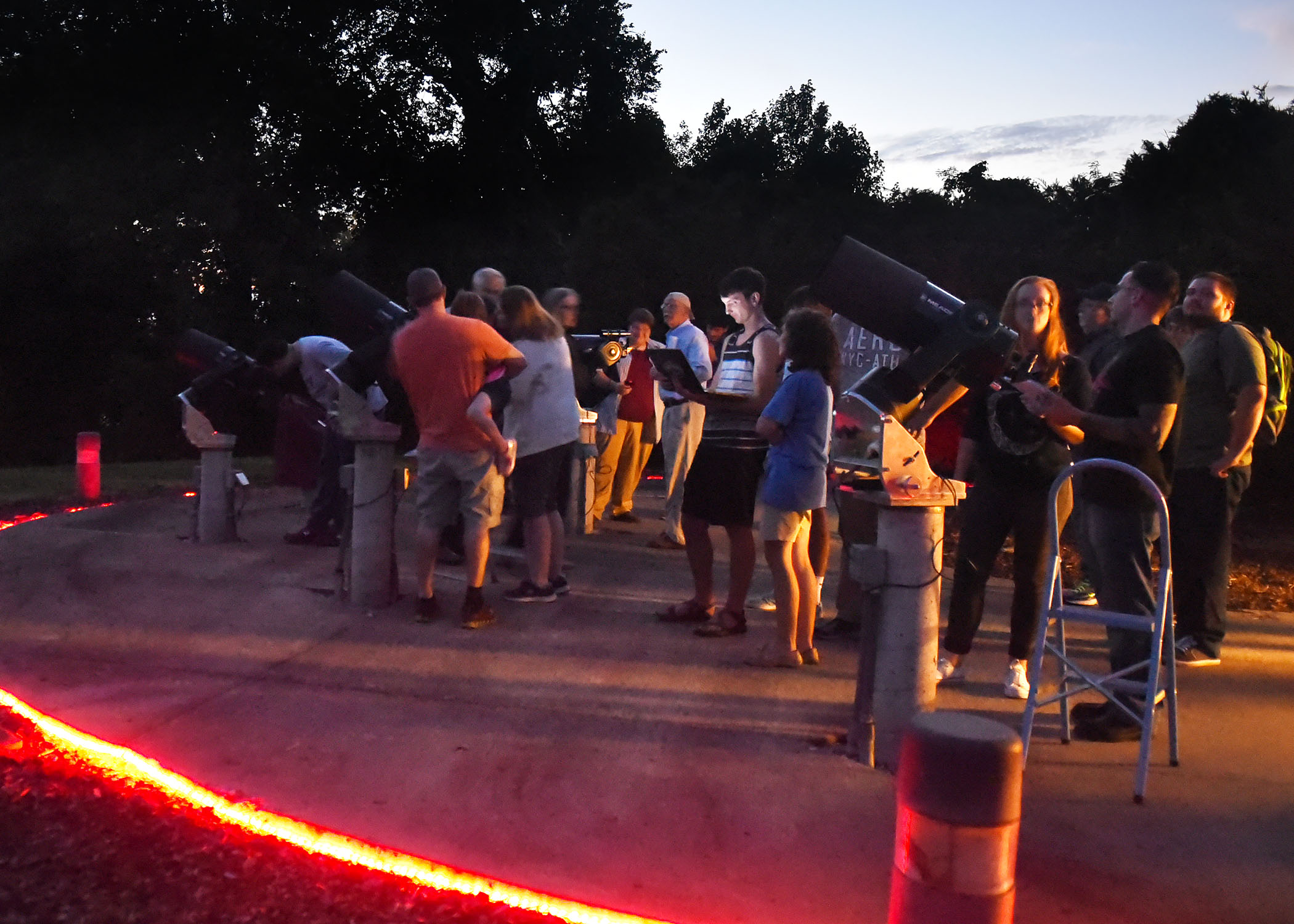 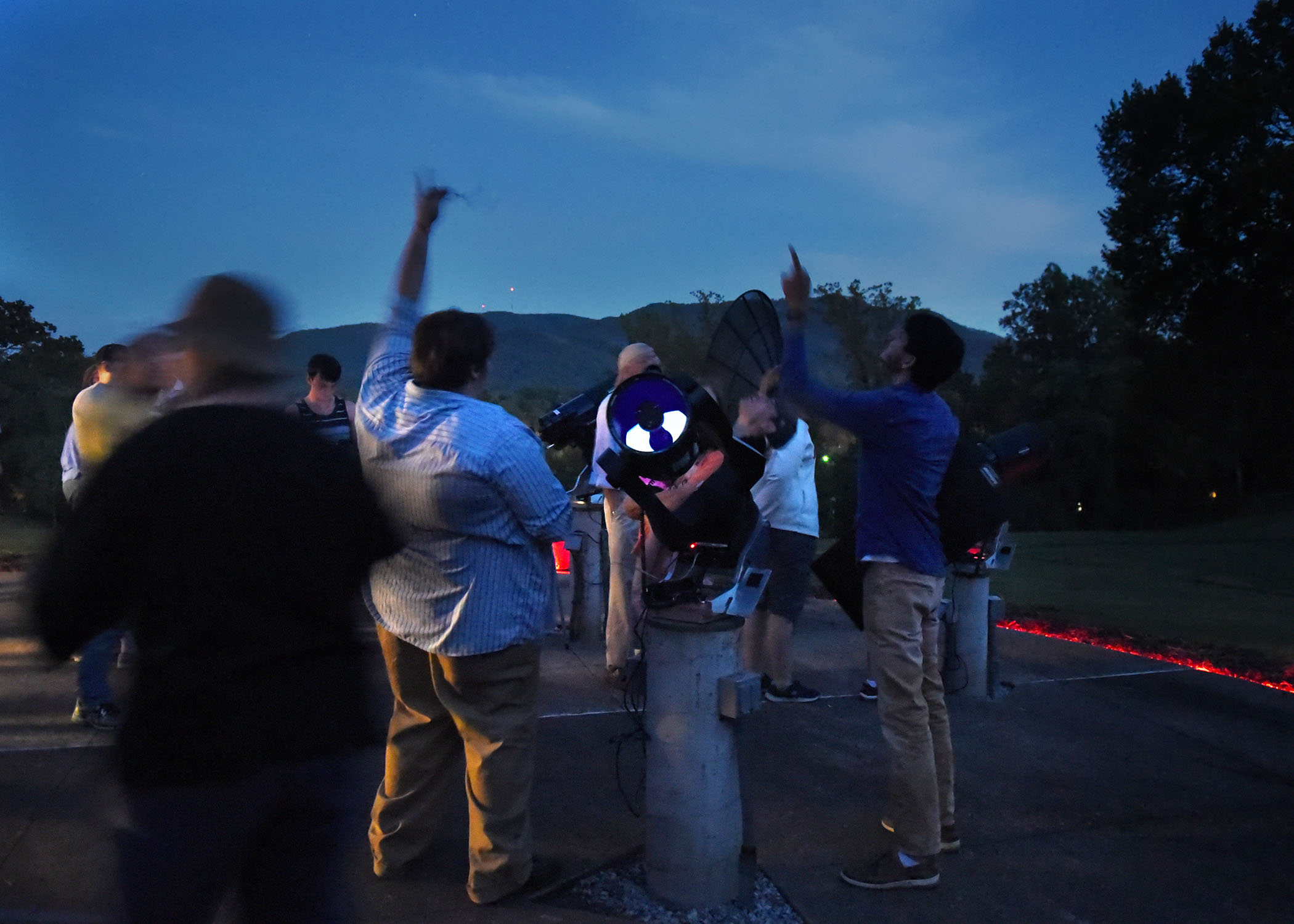 A second picture taken at the Open House on September 19, 2015.    Physics majors Thomas Holden Dingus and Andrew Boghozian have their arms raised. 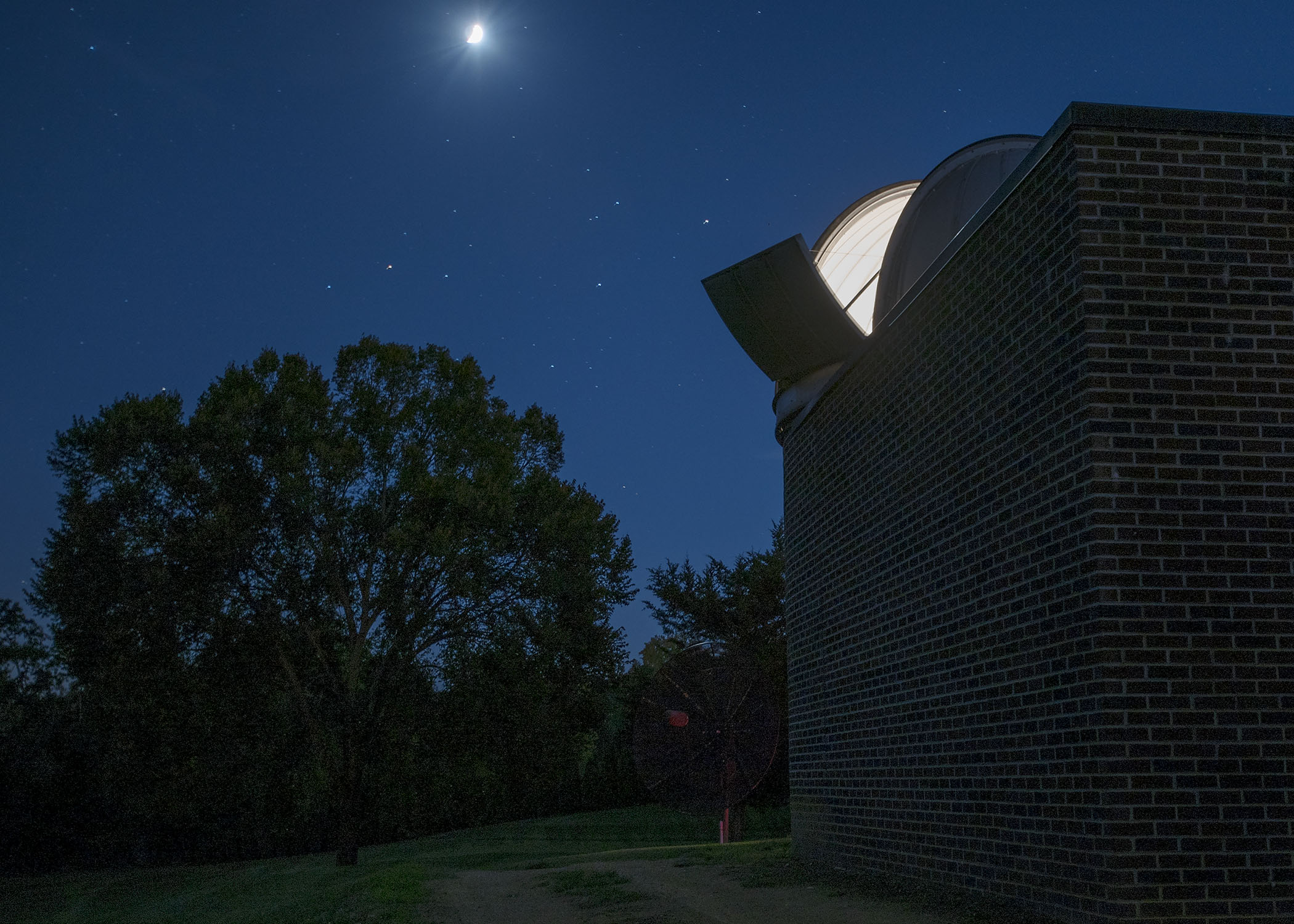 The dome of the 14 meter telescope at Powell Observatory. 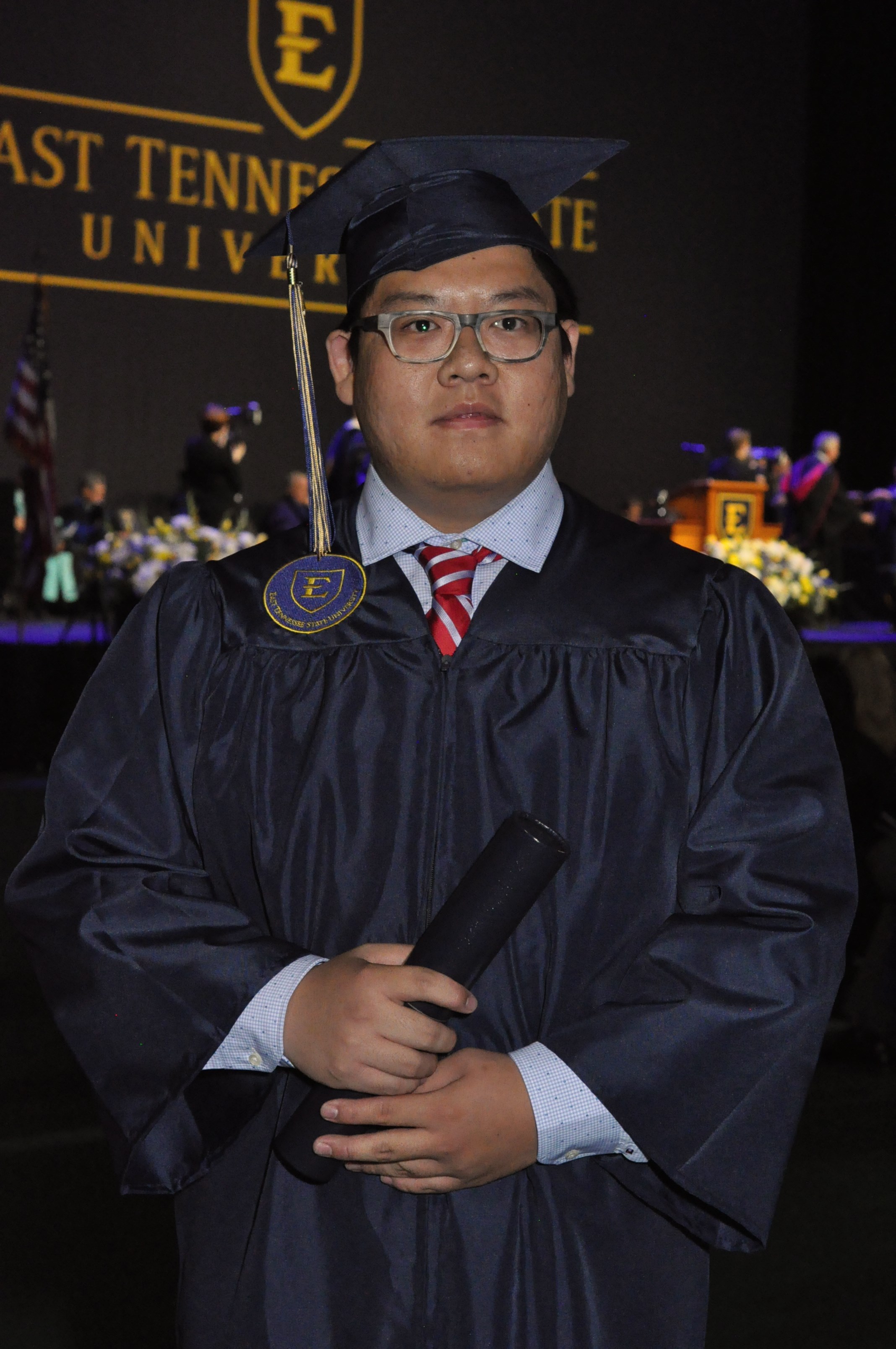 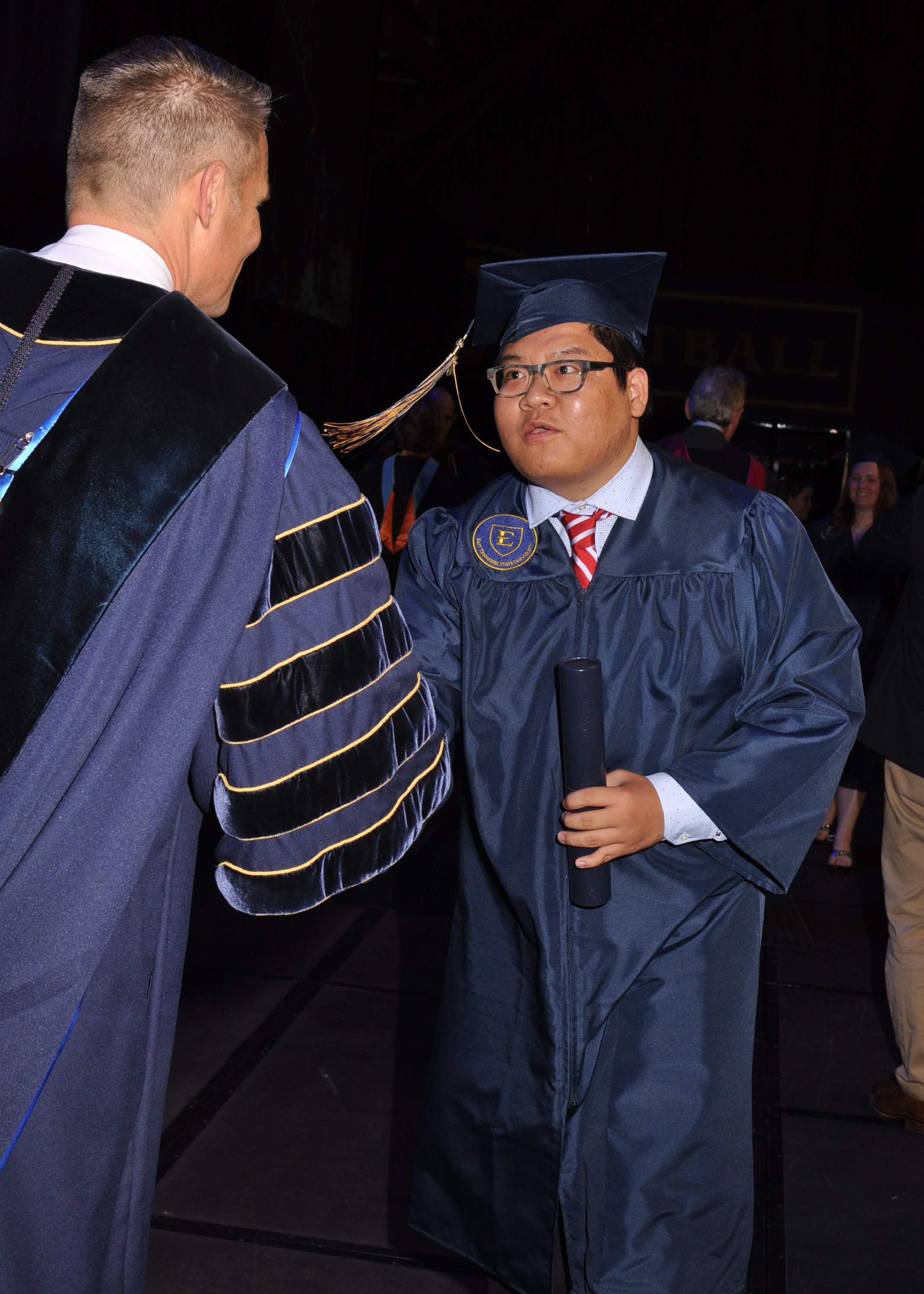 Two of the graduating seniors at the Spring 2016 lunch: Brandon Henard (left) and Yujia Wang (right).

On April 25, 2016, Physics major Austin Patrick presented his Honors thesis.  It is titled `Photoinduced Electron Transfer and Its Applications'. 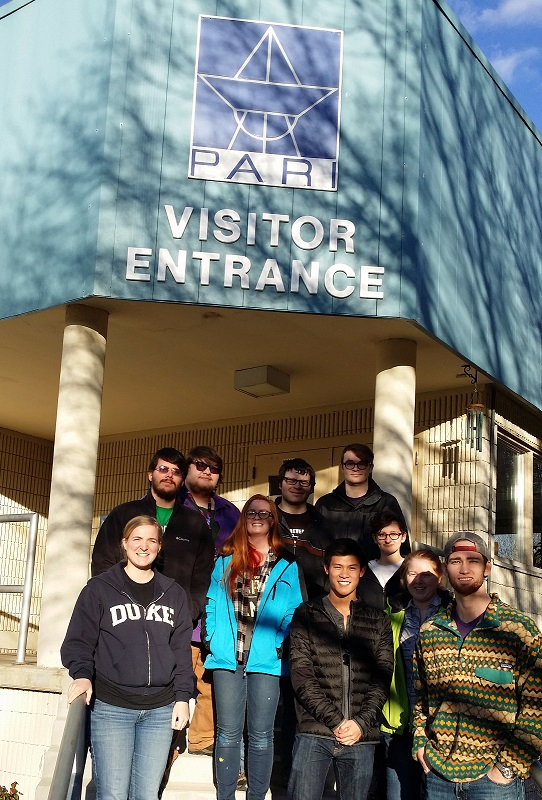 Physics major Susan Olmsted participated in the `Posters at the Capitol' event February 24, 2016 in Nashville.  She presented a poster entitled `Star Formation Rates in Ring Galaxies'.

The ETSU Society of Physics Student organization was named a `Notable SPS Chapter' by the National SPS organization, for the year 2014/2015.

Two Physics majors graduated in December 2015: Andrew Boghozian and Yonghui Wang.   Andrew is shown on the left (with Physics major Susan Olmsted).; Yonghui on the right

hree Physics majors at the December 9, 2015 End-of-Semester/Holiday Party.   In back: Susan Olmsted.   In front left to right: Thomas Holden Dingus and David Frost.

Physics major Will Asbury gave a research talk at a conference for undergraduate research  held at the University of Tennessee in Knoxville October 30, 2015.  The conference was titled the Tennessee Experiential Learning Symposium.  His talk was titled  `Polarized light observations of the eclipse of Epsilon Aurigae'.  Dr. Richard Ignace from the ETSU Department of Physics and Astronomy also attended this meeting. 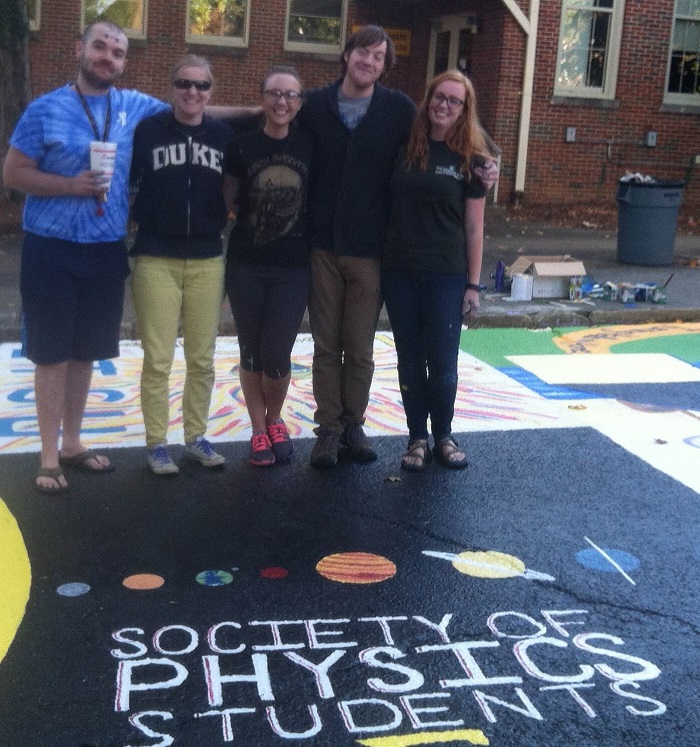 Students in the Variable Stars course, posing with the 14 inch telescope at Powell Observatory. Left to right:  Marc Cloyd, Hannah Greene,  Ashton Morelock, and Macon Magno.  Marc Cloyd is an Astronomy minor; the other three are Physics majors. 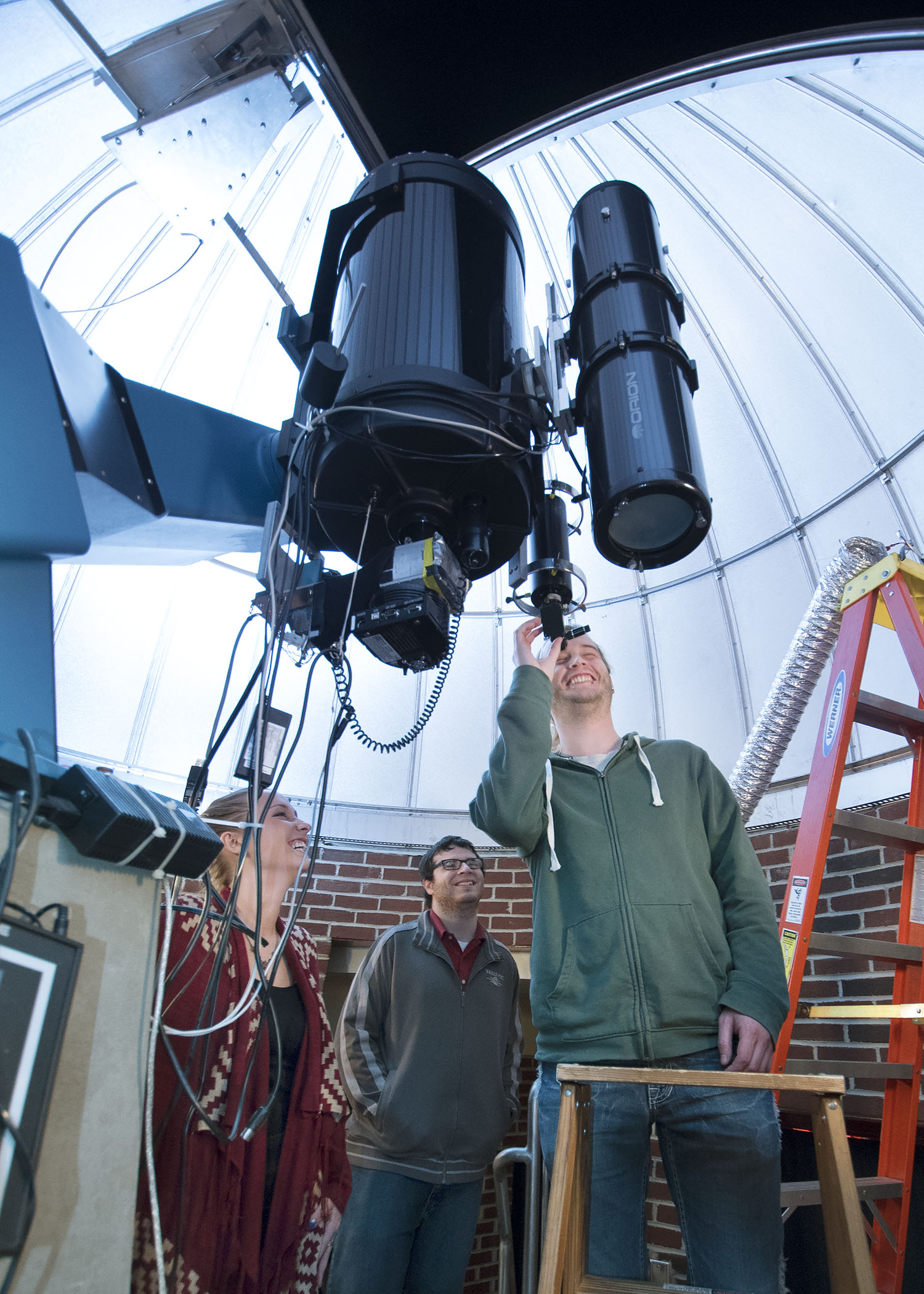 Another picture of students in the Variable Stars course.  Left to right: Ashton Morelock, Macon Magno, and Marc Cloyd.

Twelve Physics Majors attended a lunch for majors in the Department August 21, 2015.

Devanshu Agrawal (Physics and Math double major, class of 2014) completed a masters in Mathematics from ETSU in May 2016. 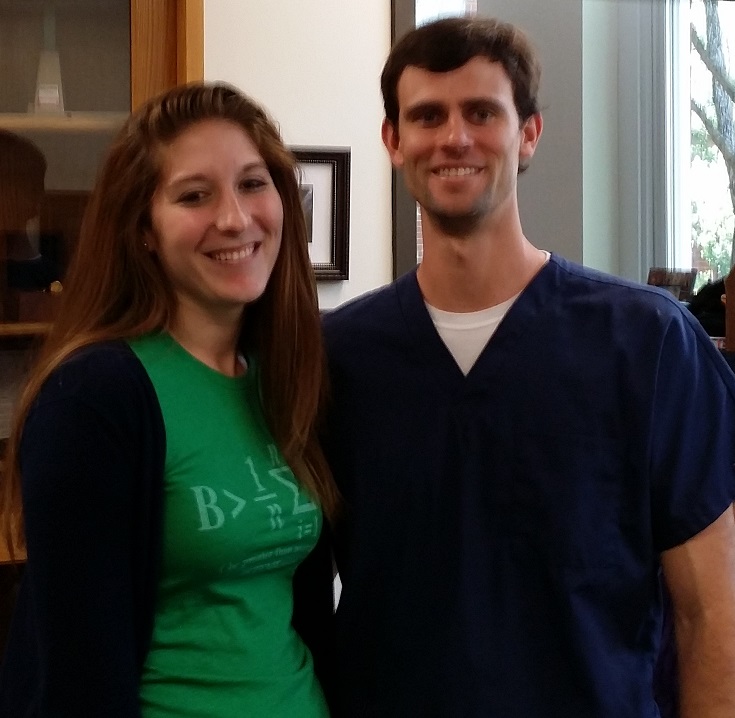 Recent Physics graduates Elizabeth Williams and Ben McKinney (both class of 2015) attended the Spring 2016 Dept lunch held on April 20, 2016.  Elizabeth is now a graduate student in the Masters of Teaching program at ETSU, and Ben works at Woodridge Hospital in Johnson City.

Physics and Mathematics graduate William Jamieson (Class of 2013) was in the news for receiving a National Science Foundation graduate fellowship.   He is now a graduate student in Math at the University of Nebraska Lincoln.

ETSU Physics graduate Joseph T. McNeil (Class of 2015) started graduate school in Physics at the University of Florida in Gainesville in Fall 2015.

ETSU Physics graduate Kristen Campbell (Class of 2015) started medical school at the University of Tennessee in Memphis this fall. 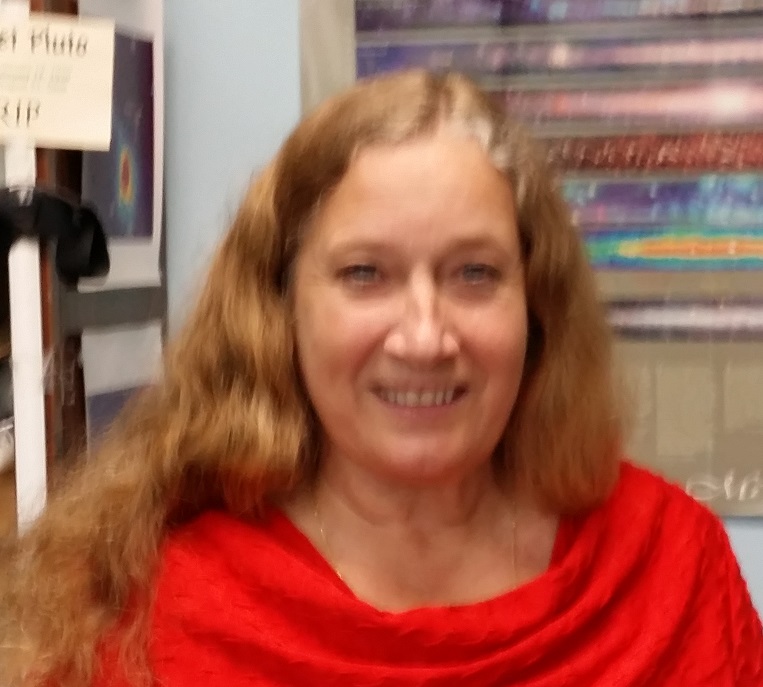 ETSU Physics major graduate Sharon Gray (Class of 2009) started a job as a lecturer in the Physics and Astronomy Department at ETSU.   After graduating from ETSU, Sharon obtained a master's degree in Biomedical Engineering from the University of Tennessee.

Dr. Richard Ignace won the College of Arts and Sciences Research Award for 2015/2016

Department faculty Dr. Beverly Smith and Dr. Mark Giroux attended a meeting of the Physics Teacher Education Coalition (PhysTEC) in Baltimore Maryland March 4 - 6, 2016.   They presented a poster entitled `Back to the Classroom: Teaching Radio Astronomy'.   This described a program in which Physics/Astronomy majors/minors participated in a radio astronomy workshop, then did classroom presentations on radio astronomy.   For more information and pictures of the workshop, click here.

As noted above, former ETSU physics major Sharon Gray started a job as a lecturer in the Department in Fall 2015.