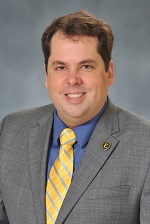 Felipe Fiuza is an Assistant Professor of Spanish at East Tennessee State University (ETSU), where he is also the Director of ETSU's Language and Culture Resource Center. As director of the center, he works towards closing the gap between East Tennessean native speakers of english and people from other languages and cultures through language services, such as interpretation and translation, offered by the center. Felipe's first poetry book, Ucideia, just won first place in a peer-reviewed literary contest from the Federal University of Espírito Santo Press, and as a result will be published by them with a release date of March, 6th, 2020. His research interests are linked to the intersection between literature and cognitive sciences, focusing in Brazilian Literature and in Literature from the Iberian Peninsula.