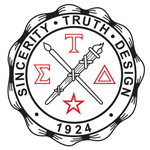 Our Xi Sigma chapter's membership is available to both undergraduate and graduate students. Benefits of memberships range from scholarship competitions and internships at publishing companies to the opportunities to present conference papers and submit work to the organization's literary journals, The Sigma Tau Delta Rectangle and The Sigma Tau Delta Review. Prospective members should have a minimum of two college courses in English language or literature beyond Freshman English while maintaining a "B" average. You can learn more about Sigma Tau Delta at its website, and you can learn more about the ETSU chapter of Sigma Tau Delta and the schedule for meetings and events by contacting ETSU Sigma Tau Delta president Taylor Hubbard and faculty advisor Dr. D. Michael Jones.

Pi Delta Phi was founded as a departmental honor society at the University of California, Berkeley, in 1906.

The society expanded slowly during the next fifteen years, but enjoyed renewed interest and growth during the 1940s and 1950s. At the present time, it numbers more than 330 chapters established at representative public and private colleges and universities in almost every state, as well as chapters in Paris and Aix-en-Provence. The society was admitted to membership in the Association of College Honor Societies in 1967.

The National German Honor Society, Delta Phi Alpha, seeks to recognize excellence in the study of German and to provide an incentive for higher scholarship.

The society aims to promote the study of the German language, literature, and civilization; it endeavors to emphasize those aspects of German life and culture which are of universal value and which contribute to man's eternal search for peace and truth.

Delta Phi Alpha awarded ETSU its Kappa Gamma chapter, one of only five in the state, in October of 1988. To find out more about Delta Phi Alpha, visit their official website.

Its insignia is the royal seal of Fernando and Isabel, representing Castille, León and Aragón. The society's colors are red and gold and its flower is the red carnation.

ETSU Creative Writing Socitey is  an association for those who wish to further improve their skills in creative writing. Members include writers of various genres, such as fiction, nonfiction, or poetry, among many others. The society's main goals are to peer review one another's work, get works completed, attempt to get said work published, and offer a welcoming community that allows writers to come together. Periodically through the semester, the society will have published authors and other experts in the field hold discussions, readings, and workshops for those who are interested. You can also contact current president, Bryana Marshall, or Dr. Jesse Graves, faculty advisor.