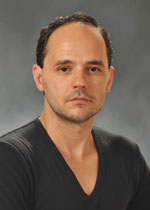 D. Michael Jones has a Masters of Fine Arts degree from Emerson College and a PhD from the University of Connecticut. His areas of study include Romanticism, Creative Writing, Long Nineteenth Century, genre fiction, American 20th Century popular culture, working-class and masculinity studies. His The Byronic Hero and the Rhetoric of Masculinity in the Nineteenth-Century Novel was published in 2017 by McFarland Press. His most recent article, “E.W. Hornung’s Raffles and English Aesthetic Movement: The Rhetoric of Romance Masculinity,” was published in English Literature in Transition (January, 2016). He is a first generation college student from a rural East Tennessee, working-class family.