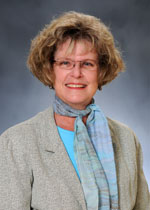 Kingsport native Judy Slagle received her B.S. and M.A. at ETSU and Ph.D. in English from The University of Tennessee, Knoxville (1991). Her first tenure-track position was at MTSU, where she taught British literature and directed the graduate program in English until 1997, when she became Associate Dean of Humanities at Roane State Community College. In 1999 Dr. Slagle returned to ETSU, becoming Chair of the Department of Literature and Language (formerly English) in 2000. She served as chair until her appointment as interim dean of The Honors College in 2014 and dean in 2015. Dr. Slagle still regularly teaches undergraduate and graduate courses in British literature. Recent publications include Romantic Appropriations of History: The Legends of Joanna Baillie and Margaret Holford Hodson (Fairleigh Dickinson UP, 2012); "The Rise and Fall of the New Edinburgh Theatre Royal, 1767-1859: Archival Documents and Performance History" (Restoration and Eighteenth-Century Theatre Research, 2015); and other books, articles and book chapters focused on eighteenth- and nineteenth-century women writers.