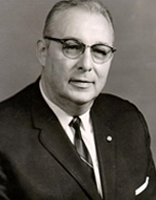 John P. Lamb, Jr. was born in Johnson City and attended East Tennessee State University receiving a B.S. degree in 1937.  He also received a certificate in public health from Vanderbilt University and a master of public health degree from Yale University.  He served as an officer of the United States Public Health Service from 1953-1981 in addition to serving the Tennessee Department of Public Health in Carter, Johnson, and Unicoi counties.

Lamb returned to his first alma mater in 1949 to serve as professor in Health Education and in 1963 became the dean of the College of Health when East Tennessee State College was reorganized as East Tennessee State University and remained in that capacity until his untimely death in 1981.

While serving as dean of the College of Health, he was one of the key leaders in the efforts to establish the James H. Quillen College of Medicine.

He received numerous certificates, awards, and honors during his tenure in the field of health education.  East Tennessee State University recognized his efforts with the Outstanding Alumni Award in 1971.  He received the Southern Branch of the American Public Health Association’s Meritorious Award for Outstanding Service in 1975.  The Tennessee Public Health Association also recognized his achievements in 1976 through the R.H. Hutcheson, Sr., M.D. Award, which is presented to the outstanding person in the field of public health.