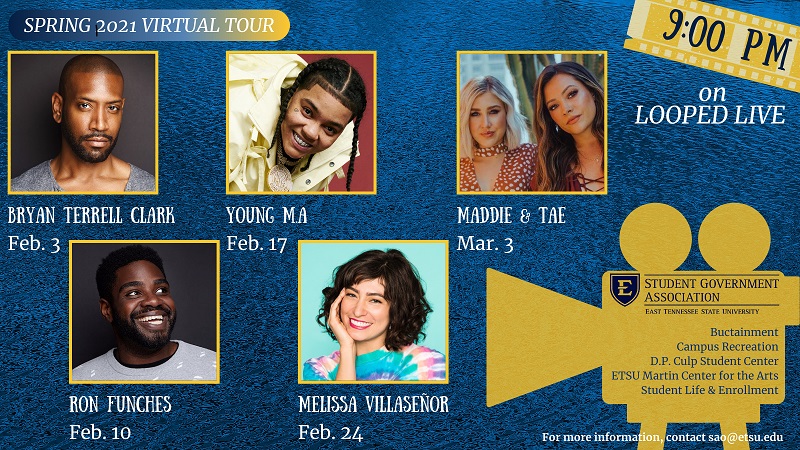 Bryan Terrell Clark is an accomplished actor and singer/songwriter who has performed in hugely successful Broadway shows and a wide range of popular television programming for various networks. In 2019, Bryan reprised his role as George Washington in the record-breaking Broadway hit Hamilton. He made his Broadway debut playing the iconic role of Marvin Gaye in Motown: The Musical, which received a 2014 Grammy Award nomination for “Best Musical Theater Album”. Read more and submit Q&A questions for Bryan Terrell Clark here.

Ron Funches is a triple threat. He is an excellent stand-up comedian, actor and writer. Ron has built an impressive acting resume. Whether it's lending his voice to projects like Trolls, Bob's Burgers, and Adventure Time. Or his memorable acting roles on The Goldbergs, Black•ish, New Girl, Transparent, Powerless, and Undateable. He even made being a gang member likable in the film Get Hard. His personal appearances include Conan, The Tonight Show, Match Game,To Tell The Truth, Chopped, Cupcake Wars and many more. Read more and submit Q&A questions for Ron Funches here.

Young M.A, Raised in Brooklyn, learned a lot in her formative years. The streets called her early, though losing her brother to violence forced M.A into a hard pivot that would change her life forever. After checking the temperature for her music through a handful of rough loosie cuts, she finally dropped off “OOOUUU” and it wasn’t long before she became a household name—landing coverage everywhere from Vogue to New York Times, as well as global ad campaigns with Adidas, Metro PCS, Google Pixel 2 and Beats By Dre. Read more and submit Q&A questions for Young M.A here.

Melissa Villaseñor broke barriers by becoming the first-ever Latina cast member of SATURDAY NIGHT LIVE. A comedic impressions expert, she got her start as a semifinalist on “America’s Got Talent.” Melissa has voiced characters for TOY STORY 4 and WRECK IT RALPH 2. Melissa has appeared in scripted television shows such as Awkwafina is Nora From Queens, Barry, and Crashing. Read more and submit Q&A questions for Melissa Villasenor here.

Maddie & Tae, arriving at the height of bro-country's peak in the mid-2010s, skewered that genre's down-home swagger with "Girl in a Country Song," a sharp satire of all the sexist clichés littering the airwaves in 2014. "Girl in a Country Song" became a hit in its own right, reaching number one on Billboard's Country Airplay charts by the end of 2014, making the duo of Maddie Marlow and Taylor Dye genuine country stars. "Start Here", Maddie & Tae's 2015 debut, kept the pair on the charts, thanks in part to "Fly," a bittersweet ballad that played to the duo's strengths as harmonizers and canny country-pop synthesizers. The two hits made a lasting impression that sustained Maddie & Tae through some label trouble in the ensuing years, a period that ended with a pair of EPs in 2019 that were subsequently compiled as their 2020 LP "The Way It Feels." Read more and submit Q&A questions for Maddie & Tae here.

HOW TO ATTEND THE FESTIVAL

If you already have an ETSU Looped Account skip to #3.

You're all set! You can watch each show on your desktop computer by logging into LoopedLive.com or download the Looped app to watch on your mobile device.