The faculty co-advisors for the ETSU Chapter of the math honor society Kappa Mu Epsilon are Dr. Robert Beeler and Dr. Bob Gardner. For academic 2014-2015, the Tennessee Beta KME officers are:

New members are inaugurated at the Mathematics Honors Banquet which is held in April. Upon graduation, KME members are allowed to add a pink and silver honor cord to their graduation regalia. Cords can be ordered individually from www.honorsgraduation.com (but check with the faculty advisor to see if a bulk order may be placed).

The Pentagon, the official journal of KME, is no longer published in a paper version. New issues are now, however, available in PDF form online at: http://www.pentagon.kappamuepsilon.org/Pentagon_Issues.php. This website also includes ALL back issues of the journal. Here is the announcement of the creation of the Tennessee Beta Chapter in The Pentagon, Volume XIX, Number 1 (Fall 1959, page 56): 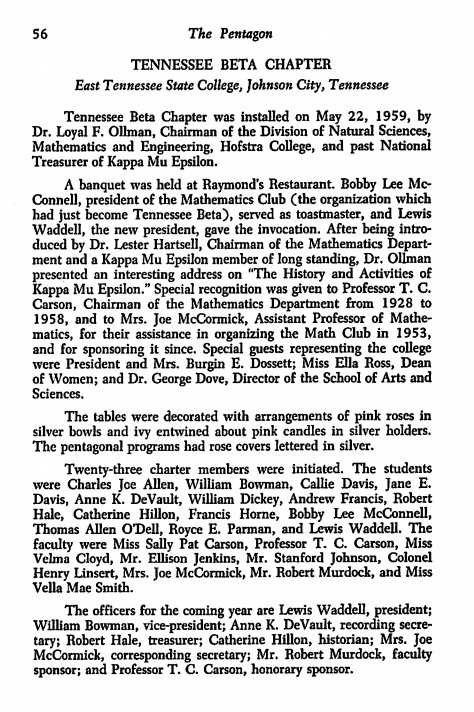 Here are summaries of our recent activities:

Here are some links to the national organization: