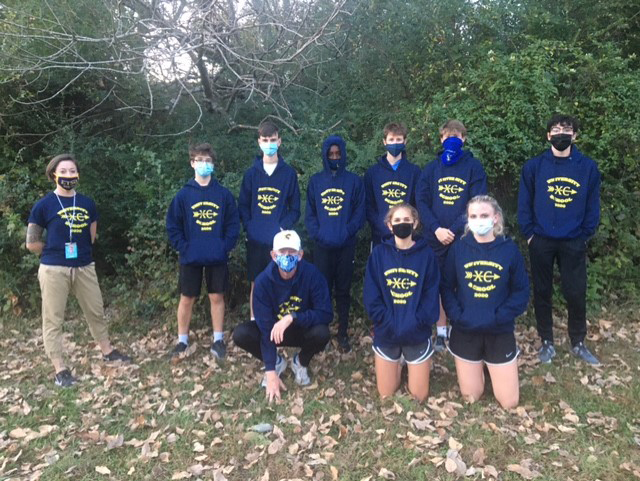 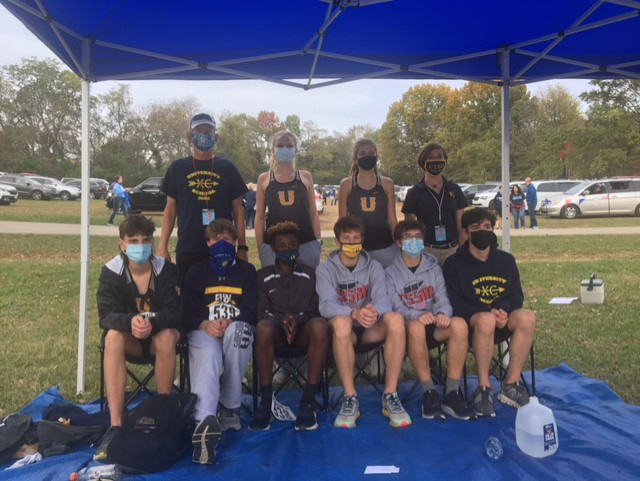 University High runners had an incredible day at the state finals in Hendersonville! Incredible!

The boys finished 12th out of 24 schools!

Listed below are our runners (left to right in the picture), their individual place, time and in (.  ) their improvement over a week ago at the Regional meet. 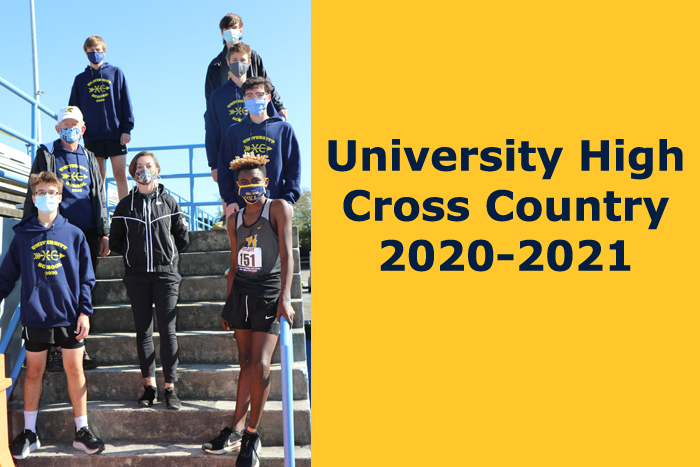 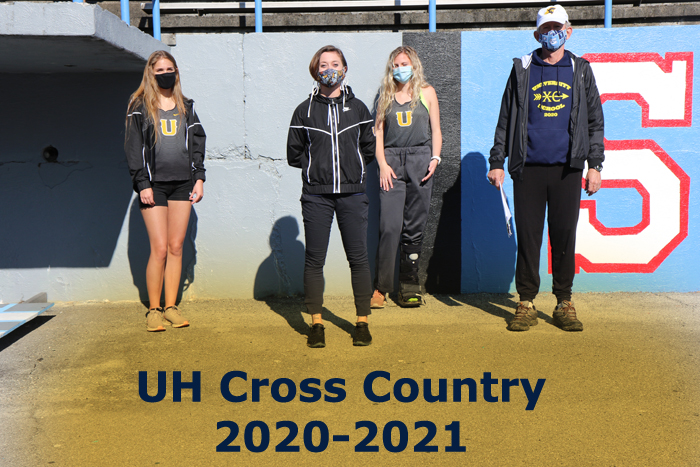 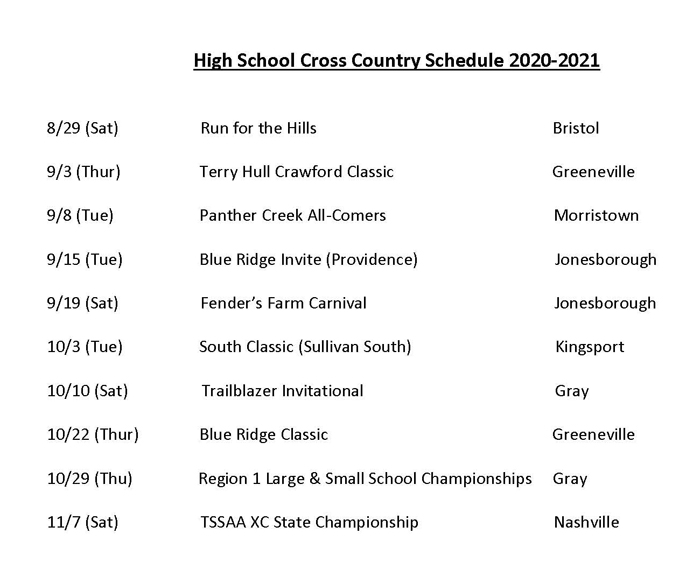 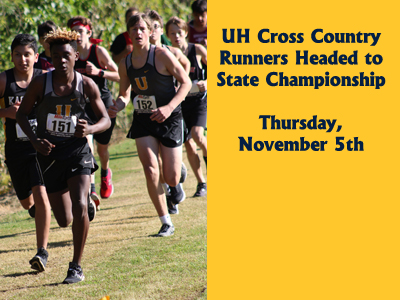 Congratulations to our University High Cross Country Boys' team for earning the District Runner-Up trophy. Also, Isabelle Johnson finished second overall for the girls followed by Melina Summey with an overall sixth place finish. Both Melina and Isabelle, along with our boys team (Clay Duncan, Braeden Williams, Landon Crapes, Jacob Allen, A.J. Murphy, and Caleb Walley) will all compete in the State Championship Race on Thursday, November 5th, in Hendersonville, Tennessee.  Good luck to all of our runners!  Go, Bucs, Go!

High School Cross Country has started - any high school student interested in running this year may reach out to our school athletic director, Mr. Honeycutt (honeycuttdg@etsu.edu), for more information on practices and required documentation. 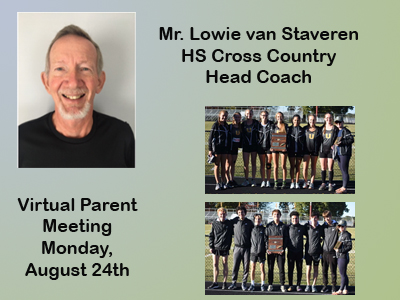 The University School Athletic Department would like to introduce Mr. Lowie van Staveren as the new Boys and Girls Cross-Country Head Coach.

Mr. van Staveren is a life-long runner/athlete, who still actively participates in triathlons.  He is also a retired teacher from the state of Michigan with over 30 years in the classroom and more than 40 years of coaching experience.  During his tenure as a coach, he has accumulated several Top 10 finishes in both the Boys’ and Girls’ Cross-Country State Finals in Michigan.  In 2010, Mr. van Staveren was awarded the annual “Kermit Ambrose Award” by the Michigan Interscholastic Track & Field Coaches Association for “life-time contributions” to the sport of Cross-Country. Additionally, he is a Hall of Fame Inductee for both the state of Michigan and Hackett Catholic Central High School.

Welcome to University School, Mr. van Staveren, we are honored to have you as the newest member of our school family!

For any students interested in participating in cross-country this year will need to make sure you have all of your forms turned in or ready to turn in at practice.  These forms include:  cardiac arrest, concussion, physical form, and field trip form.  (More information/forms) Please note that if these forms are not turned in, the student cannot practice. 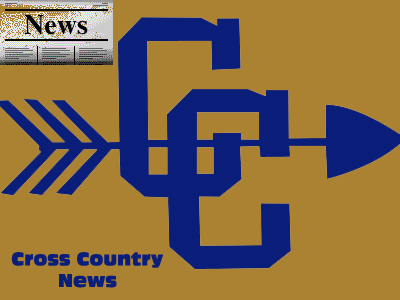 The cross country season is going to look quite different this fall.

Most of the bigger local invitationals will have multiple varsity races with a specified number of teams in each race and larger varsity squads rather than just a typical scoring seven.

According to local race directors, some invitationals will not have junior varsity races and some will not even allow spectators.

There are quite a few nuances like not setting up team tents — in order to discourage congregating — and teams basically warming up, running the race, cooling down and then leaving as soon as possible. There will be no awards ceremonies at most races.

Regardless, athletes will still have to run the same course, but some may get to run earlier in the day than others.

LARGE CLASS GIRLS
On the individual side locally, Science Hill junior Jenna Hutchins is far and away the best runner in the state, and she may end up being one of the best runners in the country.

There's not much left to say when you're a two-time Foot Locker All-American, have two outdoor state records and a national junior class record.

The goals should be simple for Hutchins this season: win state again, win the Foot Locker regional and save as much as possible for the big prize in San Diego.

The state record for the 5-kilometers is also within sight, but that would just be icing on the cake.

Tennessee High sophomore Zoe Arrington should be looking to place top five in the state and possibly contend for a spot in California as well. Outside of the recent dominance of Hutchins and former Dobyns-Bennett three-time state champ Sasha Neglia, Arrington has some of the area's top marks at a young age.

For Daniel Boone, sophomore Kamryn Wingfield is the best returnee after finishing 22nd last season at state. The youngest Chellah sister, Patricia, is a senior this year for the Lady Trailblazers and made the all-region team last season.

The defending state champion Dobyns-Bennett Lady Indians will be going through a massive rebuild, having lost four of the top five last season to graduation.

Sophomore Autumn Headrick is the only returning member of the top five and, according to coach Bob Bingham, has made some good strides and is improving.

On the team side, there is no clear-cut favorite, but Science Hill could hold a slight edge because four of the top five return.

Trinny Duncan, Ashley Doyle and Jordan McIntosh make up the rest of the scorers for the Lady Hilltoppers. However, do not be surprised if former Liberty Bell standouts Hannah Dawson and Morgan Mahoney break into the top five by the end of the season.

Crockett could make a strong bid for the title as Ashlynn Roy and Breanna Dunn make a good core of the team after Dulaney.

LARGE CLASS BOYS
By the end of the season, Daniel Boone could end up having the top three places at the regional meet.

Kentucky transfer Levi Streeval, junior Conner Wingfield and incoming freshman Luke Mussard are the core three for the Trailblazers, who always tend to come on strong at the end of the season.

The team that could be hurting the most is Science Hill. Losing a true low stick in Aaron Jones left the Hilltoppers' best returner by time as Steven Johnson. However, they will be helped out with University High all-state transfer Nick Daniel.

Dobyns-Bennett is a young team, but has a chance at qualifying, according to Bingham. Dane Sullins is the best returner for the Indians at 17:42, but Joe Neglia is not far behind at 17:43.

The team that could make a strong bid to push Daniel Boone is Washington County rival David Crockett. Bryson Livesay, who ended up running 16:32 at the Nike Southeast Regional last postseason, is the best returner not on the Boone team. Him and Gideon Erwin will be a good 1-2 punch for the Pioneers.

For the best local returning individuals, Sullivan Central's Mason Sanders stands out after having run 17:14 at the regional meet last season.

SMALL CLASS GIRLS
It's a season of change for University High as Maggie Whitson has resigned from her position and the Bucs are currently left without a coach.

However, Isabelle Johnson is the top returner locally and is the defending individual regional champ.

UH should be favored again to win the team regional title.

On the individual side, Happy Valley's Holly Moore, who came close to earning all-state last season, comes back for her junior season.

SMALL CLASS BOYS
Talk about a total rebuild for the Buccaneer boys.

The aforementioned Daniel has transferred and the best returner for UH barely had a season-best time last year under 19:30.

Although with how few runners are usually in the regional small schools race, UH could just pack up with a group running about a 19:30 pace and most likely still qualify for the state meet.

Please note that due to the TSSAA Policy on Outdoor Sports Practice during times of extreme heat, Cross Country practice may be cancelled by the coach or Athletic Director.  Please remind athletes to bring a water bottle and to drink plenty of water at school and at home!

Runners - please note that you MUST have a physical and turn in your Emergency Treatment Form  ASAP.  You cannot participate in a meet until these forms are returned

Get in the right lane

As soon as you cross a bridge, turn right onto Jared Drive and take immediate right onto Riverport Road

Go 2 miles, complex is on the right

Take Bristol Highway and Winged Deer Park will be on the left.  Take Carroll Creek Road until the boat dock.  The race is to the right of the boat dock and pavilion.

Take 1-181 towards Kingsport and take Rock Springs Road exit. After you exit turn right onto Moreland Drive. You will pass Sullivan South High School on your left. Continue on road, crossing straight through red light on Ft. Henry Drive and follow road until you reach park. Follow signs.