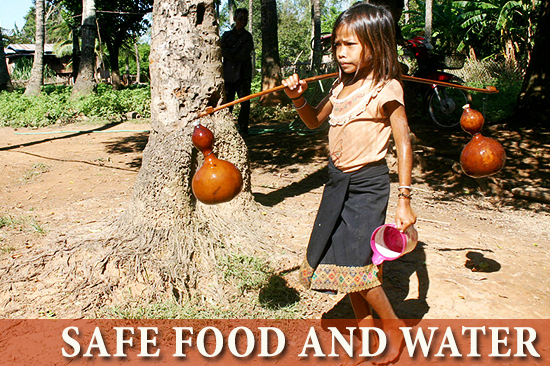 Safe food and water are the basic bedrocks of life. While we all tend to understand the importance of a supply of safe and abundant food, many people do not understand what a challenge to health and welfare is represented by unsafe or unavailable water. In many parts of the world, people spend hours each day bringing water back from wells, streams, lakes, or standing pools. Frequently, this water is contaminated with human waste, chemicals, and other pollutants. Sometimes the process of traveling to and from the water supply puts individuals at risk of attack by animals or people.

Over 3 million people a year are believed to die from water-related diseases. Access to clean water, and the ability to keep it clean by not having it contaminated with human waste, industrial by-products, mining effluents, or other pollutants, is absolutely essential to improving health.

We hear, periodically, of famines in other parts of the worldoften related to natural or man-made disasters. Recently, Bill visited the famine-torn region of the Horn of Africa, which is suffering from its worst drought in 60 years. 29,000 children had died in the 90 days before his visit.

Even in the absence of significant famines, it is estimated that each year over half of all deaths of children under five years old are associated with malnutrition. This translates into almost 20,000 deaths, mostly children, every single day.

As the world's population grows, there will be a growing tension on the supply of food and water. More people means more mouths to feed and more gallons of water needed. It also means that regional disruptions of the food supplyfrom hurricanes, fires, earthquakes, or man-made disasterswill impact increasing numbers of people. A really significant disruption could affect people thousands of miles from the site of the disaster. The resulting pressures to mass-produce food can have an impact on the environment, on the nutritional value of the food, and on our health.