The Right to Vote and the Democratic Process 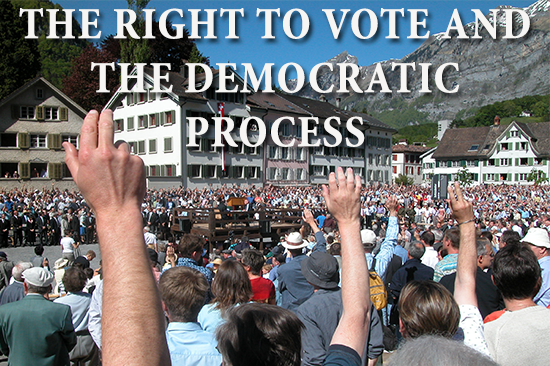 Many people who were born with the right to vote have become jaded about it. They rationalize that their one vote can’t matter against the backdrop of millions of other votes. Further, they say, their vote can’t counteract the huge amounts of money that corporations, special interest groups, and “the wealthy few” invest into electoral campaigns. A single vote, many people conclude, is too insignificant to matter.

Today, only about one third of the world’s population lives in countries with full and free democracies. The majority of countries, in both Africa and Asia—the very parts of the world facing some of most pressing challenges to human health and welfare—are not included in this list.

Those of us with “the vote” must recognize, of course, that the process of voting is only one relatively small part of the democratic process. That process begins with frank discussions with our co-workers and neighbors; open dialogue with our elected officials; a willingness to listen—truly listen—to the opinions of others; an ability and an obligation to express our own views, and, above all else, the recognition that sometimes each of us must be willing to change our views. When all of that is done, “the vote” itself is a statement of commitment not just for the issue or the candidate that we are voting for, but also for the very process that the ballot box represents.

We must protect and exercise our own right to vote, and become champions for that same right for people living around the world.