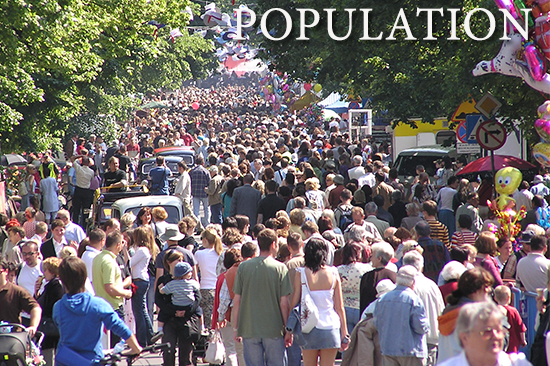 Almost all of the problems of the world today either stem from, or are worsened by, overcrowding. In October, 2011, the world’s population passed the 7 billion mark—seven thousand million—7,000,000,000. That’s a lot of people.

To give you a sense of how fast this is changing:

That is a staggering thought—there are twice as many people on the earth today as when we were born. Each day, about 200,000 more people are born than die, meaning that every month, we are adding the same number of new mouths to feed as the entire population of the state of Tennessee.

Some would suggest that allowing people to die from disease, malnutrition, and natural disasters might be one solution to the problem of overpopulation. Why, it might be asked, are we so concerned with addressing the causes of death around the world, and, at the same time, bemoaning the increase in the world’s population? The simple answer is that there is an incredible difference between allowing people to die from the ravages of starvation, preventable diseases, or as the aftermath of a disaster on the one hand, and in taking a scientific and compassionate approach to educating women and providing acceptable birth control methods on the other.

Put more plainly, if you allow death to occur through the blunt instruments of fate, the blow that is struck just might hit home.